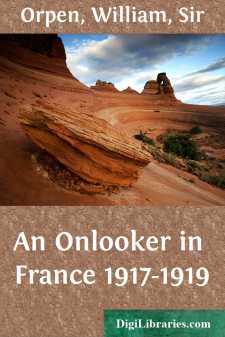 The boat was crowded. Khaki, everywhere khaki; lifebelts, rain and storm, everything soaked. Destroyers, churning through the waves, played strange games all round us. Some old-time Tommies, taking everything for granted, smoked and laughed and told funny stories. Others had the look of dumb animals in pain, going to what they knew only too well. The new hands for France asked many questions, pretended to laugh, pretended not to care, but for the most part were in terror of the unknown.

It was strange to watch this huddled heap of humanity, study their faces and realise that perhaps half of them would meet a bloody end before a new moon was over, and wonder how they could do it, why they did it—Patriotism? Yes, and perhaps it was the chance of getting home again when the war was over. Think of the life they would have! The old song:—

"We don't want to lose you,But we think you ought to go,For your King and your CountryBoth need you so.

"We shall-want you and miss you,But with all our might and mainWe shall cheer you, thank you, kiss you,When you come back again."

Did they think of that, and all the joys it seemed to promise them? I pray not.

What a change had come over the world for me since the day before! On that evening I had dined with friends who had laughed and talked small scandal about their friends. One, also, was rather upset because he had an appointment at 10.30 the next day—and there was I, a few hours later, being tossed about and soaked in company with men who knew they would run a big chance of never seeing England again, and were certainly going to suffer terrible hardships from cold, filth, discomfort and fatigue. There they stood, sat and lay—a mass of humanity which would be shortly bundled off the boat at Boulogne like so many animals, to wait in the rain, perhaps for hours, before being sent off again to whatever spot the unknown at G.H.Q. had allotted for them, to kill or to be killed; and there was I among them, going quietly to G.H.Q., everything arranged by the War Office, all in comfort. Yet my stomach was twitching about with nerves. What would I have been like had I been one of them?

At Boulogne we lunched at the "Mony" (my companion, Aikman, had been to France before during the war and knew a few things). It was an excellent lunch, and, as we were not to report at G.H.Q. till the next day, we walked about looking at lorries and trains, all going off to the unknown, filled with humanity in khaki weighed down with their packs.

The following morning at breakfast at the "Folkestone Hotel" we sat at the next table to a Major with red tabs. He did not speak to us, but after breakfast he said: "Is your name Orpen?" "Yes, sir," said I. "Have you got your car ready?" "Yes, sir," said I. "Well, you had better drive back with me. Pack all your things in your car." "Yes, sir," said I. He explained to me that he had come to Boulogne to fetch General Smuts' luggage, otherwise he gave us no idea of who or what he was, and off we drove to the C.-in-C.'s house, where he went in with the General's luggage and left us in the car for about an hour....