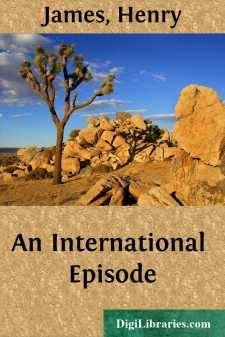 Four years ago—in 1874—two young Englishmen had occasion to go to the United States. They crossed the ocean at midsummer, and, arriving in New York on the first day of August, were much struck with the fervid temperature of that city. Disembarking upon the wharf, they climbed into one of those huge high-hung coaches which convey passengers to the hotels, and with a great deal of bouncing and bumping, took their course through Broadway. The midsummer aspect of New York is not, perhaps, the most favorable one; still, it is not without its picturesque and even brilliant side. Nothing could well resemble less a typical English street than the interminable avenue, rich in incongruities, through which our two travelers advanced—looking out on each side of them at the comfortable animation of the sidewalks, the high-colored, heterogeneous architecture, the huge white marble facades glittering in the strong, crude light, and bedizened with gilded lettering, the multifarious awnings, banners, and streamers, the extraordinary number of omnibuses, horsecars, and other democratic vehicles, the vendors of cooling fluids, the white trousers and big straw hats of the policemen, the tripping gait of the modish young persons on the pavement, the general brightness, newness, juvenility, both of people and things. The young men had exchanged few observations; but in crossing Union Square, in front of the monument to Washington—in the very shadow, indeed, projected by the image of the pater patriae—one of them remarked to the other, "It seems a rum-looking place."

"Ah, very odd, very odd," said the other, who was the clever man of the two.

"Pity it's so beastly hot," resumed the first speaker after a pause.

"You know we are in a low latitude," said his friend.

"I daresay," remarked the other.

"I wonder," said the second speaker presently, "if they can give one a bath?"

"I daresay not," rejoined the other.

This animated discussion was checked by their arrival at the hotel, which had been recommended to them by an American gentleman whose acquaintance they made—with whom, indeed, they became very intimate—on the steamer, and who had proposed to accompany them to the inn and introduce them, in a friendly way, to the proprietor. This plan, however, had been defeated by their friend's finding that his "partner" was awaiting him on the wharf and that his commercial associate desired him instantly to come and give his attention to certain telegrams received from St. Louis. But the two Englishmen, with nothing but their national prestige and personal graces to recommend them, were very well received at the hotel, which had an air of capacious hospitality. They found that a bath was not unattainable, and were indeed struck with the facilities for prolonged and reiterated immersion with which their apartment was supplied. After bathing a good deal—more, indeed, than they had ever done before on a single occasion—they made their way into the dining room of the hotel, which was a spacious restaurant, with a fountain in the middle, a great many tall plants in ornamental tubs, and an array of French waiters....