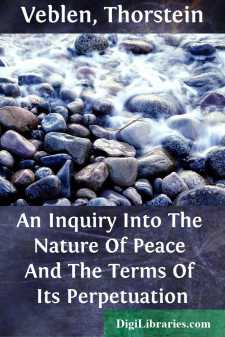 Introductory: On the State and its Relation to War and Peace

To many thoughtful men ripe in worldly wisdom it is known of a verity that war belongs indefeasibly in the Order of Nature. Contention, with manslaughter, is indispensable in human intercourse, at the same time that it conduces to the increase and diffusion of the manly virtues. So likewise, the unspoiled youth of the race, in the period of adolescence and aspiring manhood, also commonly share this gift of insight and back it with a generous commendation of all the martial qualities; and women of nubile age and no undue maturity gladly meet them half way.

On the other hand, the mothers of the people are commonly unable to see the use of it all. It seems a waste of dear-bought human life, with a large sum of nothing to show for it. So also many men of an elderly turn, prematurely or otherwise, are ready to lend their countenance to the like disparaging appraisal; it may be that the spirit of prowess in them runs at too low a tension, or they may have outlived the more vivid appreciation of the spiritual values involved. There are many, also, with a turn for exhortation, who find employment for their best faculties in attesting the well-known atrocities and futility of war.

Indeed, not infrequently such advocates of peace will devote their otherwise idle powers to this work of exhortation without stipend or subsidy. And they uniformly make good their contention that the currently accepted conception of the nature of war—General Sherman's formula—is substantially correct. All the while it is to be admitted that all this axiomatic exhortation has no visible effect on the course of events or on the popular temper touching warlike enterprise. Indeed, no equal volume of speech can be more incontrovertible or less convincing than the utterances of the peace advocates, whether subsidised or not. "War is Bloodier than Peace." This would doubtless be conceded without argument, but also without prejudice. Hitherto the pacifists' quest of a basis for enduring peace, it must be admitted, has brought home nothing tangible—with the qualification, of course, that the subsidised pacifists have come in for the subsidy. So that, after searching the recesses of their imagination, able-bodied pacifists whose loquacity has never been at fault hitherto have been brought to ask: "What Shall We Say?"

Under these circumstances it will not be out of place to inquire into the nature of this peace about which swings this wide orbit of opinion and argument. At the most, such an inquiry can be no more gratuitous and no more nugatory than the controversies that provoke it. The intrinsic merits of peace at large, as against those of warlike enterprise, it should be said, do not here come in question. That question lies in the domain of preconceived opinion, so that for the purposes of this inquiry it will have no significance except as a matter to be inquired into; the main point of the inquiry being the nature, causes and consequences of such a preconception favoring peace, and the circumstances that make for a contrary preconception in favor of war.

By and large, any breach of the peace in modern times is an official act and can be taken only on initiative of the governmental establishment, the State. The national authorities may, of course, be driven to take such a step by pressure of warlike popular sentiment. Such, e.g., is presumed to have been the case in the United States' attack on Spain during the McKinley administration; but the more that comes to light of the intimate history of that episode, the more evident does it become that the popular war sentiment to which the administration yielded had been somewhat sedulously "mobilised" with a view to such yielding and such a breach. So also in the case of the Boer war, the move was made under sanction of a popular war spirit, which, again, did not come to a head without shrewd surveillance and direction. And so again in the current European war, in the case, e.g., of Germany, where the initiative was taken, the State plainly had the full support of popular sentiment, and may even be said to have precipitated the war in response to this urgent popular aspiration; and here again it is a matter of notoriety that the popular sentiment had long been sedulously nursed and "mobilised" to that effect, so that the populace was assiduously kept in spiritual readiness for such an event....