An Exposition of the Last Psalme 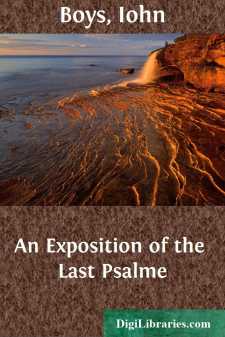 ALL the Psalmes of Dauid are comprised in two words, aHalleluiah, and Hosanna, that is, blessed be God, and God blesse; as being for the greater part either praiers vnto God for receiuing mercies, or else praises vnto God for escaping miseries. This our present Hymne placed as a bConclusion of the whole booke; yea, the beginning, middle, end, to which all the rest (as cMusculus obserueth are to be referred) inuiteth vs in prescript and postscript, in title, in text, in euery verse, and in euery Clause of euery verse to praise the Lord. Teaching these two points especially:

1. For what God is to be magnified. 2. With what For what, vers. 1, 2. O praise God in his holinesse, praise him in the firmament of his power, praise him in his noble acts, praise him according to his excellent greatnesse. a Gueuara.b Lyra in loc.c In loc.

With what, euen with all that is

This in briefe is the whole texts Epitomie, I come now to the words Anotomie, cutting vp euery part and particle seuerally, beginning first at the first, O praise God in his holinesse. Of which one sentence the Doctors haue many (though not aduerse yet diuerse) readings, especially three: Praise God in his Saints, praise God in his sanctitie, praise God in his sanctuarie. S. Hierome, Augustine, Prosper, and dother as well ancient interpreters as moderne translate here praise God in his Saints. For if he must be praised in all his creatures, how much more in his new creatures? if in the witlesse wormes, and senselesse vapours, Psal. 148, much more doubtlesse (as Theodorit here collects) in men, in holie men, in Saints, vpon whom hee hath out of his evnsearchable riches of mercie, bestowed the blessings of the flife present; and of that which is to come. d Chrysost. Basil. Euthym. Arabs apud Muscul. Lyra. Hugo Card. Turrecremat. Anonymus.e Ephes. 3. 8.16.f 1. Tim. 4. 8. First, almightie God is to be blessed for giuing his Saints such eminent gifts of grace for the good of his Church, and for the setting foorth of his glorie. So Chrysostome, Basil, Euthymius, Prosper, Placidus, Parmensis expound it. gEuery good and perfit gift is from aboue, descending from the father of lights, a good thought in a saint is gratia infusa, a good word in a saint is gratia effusa, a good deed in a saint is gratia diffusa, through his grace which is the God of hall grace, saints are iwhatsoeuer they are. Wherefore praise the Lord in his Saints, often remember their vertues as their true reliques, and as it were bequeathed klegacies vnto Gods people. So the wise man, Ecclesiasticus 44. Let vs now commend the famous men in old time, by whom the Lord hath gotten great glorie, let the people speake of their wisdome, and the congregation of their praise. So the Confession of Bohemia, chap....
Show more
Show less