An Explorer's Adventures in Tibet 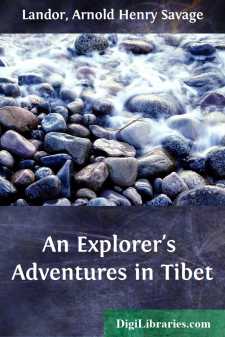 CHAPTER I A FORBIDDEN COUNTRY

Tibet was a forbidden land. That is why I went there.

This strange country, cold and barren, lies on a high tableland in the heart of Asia. The average height of this desolate tableland—some 15,000 feet above sea-level—is higher than the highest mountains of Europe. People are right when they call it the "roof of the world." Nothing, or next to nothing, grows on that high plateau, except poor shrubs and grass in the lower valleys. The natives live on food imported from neighboring countries. They obtain this by giving in exchange wool, borax, iron, and gold.

High mountain ranges bound the Tibetan plateau on all sides. The highest is the Himahlya range to the south, the loftiest mountain range on earth. From the south it is only possible to enter Tibet with an expedition in summer, when the mountain passes are not entirely blocked by snow.

At the time of my visit the law of Tibet was that no stranger should be allowed to enter the country. The Tibetan frontier was closely guarded by soldiers.

A few expeditions had travelled in the northern part of Tibet, as the country was there practically uninhabited. They had met with no one to oppose their march save, perhaps, a few miserable nomads. No one, since Tibet became a forbidden country to strangers, had been able to penetrate in the Province of Lhassa—the only province of Tibet with a comparatively thick population. It was this province, the most forbidden of all that forbidden land, that I intended to explore and survey. I succeeded in my object, although I came very near paying with my life for my wish to be of use to science and my fellow-creatures.

With the best equipment that money could buy for scientific work, I started for the Tibetan frontier in 1897. From Bombay, in India, I travelled north to the end of the railway, at Kathgodam, and then by carts and horses to Naini Tal. At this little hill-station on the lower Himahlyas, in the north-west Province of India, I prepared my expedition, resolved to force my way in the Unknown Land.

Naini Tal is 6407 feet above the level of the sea. From this point all my loads had to be carried on the backs of coolies or porters. Therefore, each load must not exceed fifty pounds in weight. I packed instruments, negatives, and articles liable to get damaged in cases of my own manufacture, specially designed for rough usage. A set of four such cases of well-seasoned deal wood, carefully joined and fitted, zinc-lined and soaked in a special preparation by which they were rendered water and air tight, could be made useful in many ways. Taken separately, they could be used as seats. Four placed in a row, answered the purpose of a bedstead. Three could be used as seat and table. The combination of four, used in a certain manner, made a punt, or boat, of quick, solid, and easy construction, with which an unfordable river could be crossed, or for taking soundings in the still waters of unexplored lakes. The cases could be used as tanks for photographic work. In case of emergency they might serve even as water-casks for carrying water in regions where it was not to be found. Each of these boxes, packed, was exactly a coolie load, or else in sets of two they could be slung over a pack-saddle by means of straps with rings.

My provisions had been specially prepared for me, and were suited to the severe climate and the high elevations I should find myself in. The preserved meats contained a vast amount of fat and carbonaceous, or heat-making food, as well as elements easily digestible and calculated to maintain one's strength in moments of unusual stress. I carried a .256 Mannlicher rifle, a Martini-Henry, and 1000 cartridges duly packed in a water-tight case. I also had a revolver with 500 cartridges, a number of hunting-knives, skinning implements, wire traps of several sizes for capturing small mammals, butterfly-nets, bottles for preserving reptiles in alcohol, insect-killing bottles (cyanide of potassium), a quantity of arsenical soap, bone nippers, scalpels, and all other accessories necessary for the collection of natural-history specimens....