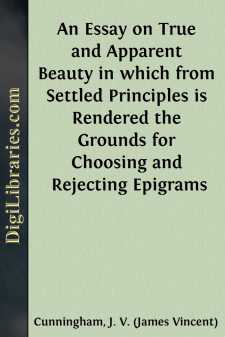 The following essay forms the introduction to a famous anthology of the seventeenth century, the Epigrammatum delectus, a Port-Royal textbook published at Paris in 1659. The essay was twice translated into French in the same century, but the use of the text in France did not survive, apparently, the downfall of the Port-Royal movement. It was, however, later adopted by Eton College, where it was used in the sixth form. The text went through thirteen English editions between 1683 and 1762. The author of the essay, and a collaborator with Claude Lancelot in making the selections for the anthology, was Pierre Nicole, who began teaching in the Little Schools around 1646. It has been said that the essay was written at that time.

The scope of the anthology is indicated on the title page, which I translate: A selection of epigrams carefully chosen from the whole range of ancient and modern poets, and so on. With an essay on true and apparent beauty, in which from settled principles is rendered the grounds for choosing and rejecting epigrams. There are added the best sententiae of the ancient poets, chosen sparingly and with severe judgement. With shorter sententiae, or proverbs, Latin, Greek, Spanish, and Italian, drawn both from the chief authors of those languages and from everyday speech.

The essay is preceded by a preface in which the origin, purpose and method of the anthology is explained. The two ends of instruction, we are told, are learning and character, and of these the latter is the more important. But there are many books, and especially books of epigrams, that are quite filthy and obscene. Young people are led by curiosity to read these, and losing all chastity of mind enter upon a progressive corruption of life. It would be best if they could be kept wholly from such books; but there is a good deal in them of genuine profit and literary merit, which makes it difficult to keep them wholly out of the hands of youth. Therefore the editor undertook to expurgate the epigrammatists, especially Catullus and Martial. He was horrified when he read over their works, but he found some good among the bad, as in vipers not everything is poisonous but some things even useful to health. His primary purpose, then, was to protect the good young man from being harmed and to leave him no excuse for wishing to have or peruse such books since the good in them had already been extracted for him.

The difficulty then arose of making the selection serve the purposes both of morality and of judgement. The editor could either gather together all the epigrams that were not obscene, or he could choose only the best. He took in fact both ways: he preserved everything of Catullus and Martial except the cheapest odds and ends and filthiest obscenities, and he applied strict standards of judgement to the rest so that, unless an epigram had literary merit or contained something worth knowing, he felt there was no reason to burden the book with it.

Nevertheless, some middling epigrams found entrance into the anthology—he confesses the fact so the reader will not look for excellence without flaw....