An essay on the American contribution and the democratic idea 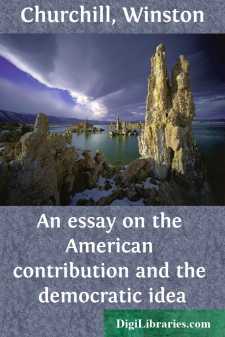 Failure to recognize that the American, is at heart an idealist is to lack understanding of our national character. Two of our greatest interpreters proclaimed it, Emerson and William James. In a recent address at the Paris Sorbonne on "American Idealism," M. Firmin Roz observed that a people is rarely justly estimated by its contemporaries. The French, he says, have been celebrated chiefly for the skill of their chefs and their vaudeville actors, while in the disturbed 'speculum mundi' Americans have appeared as a collection of money grabbers whose philosophy is the dollar. It remained for the war to reveal the true nature of both peoples. The American colonists, M. Roz continues, unlike other colonists, were animated not by material motives, but by the desire to safeguard and realize an ideal; our inherent characteristic today is a belief in the virtue and power of ideas, of a national, indeed, of a universal, mission. In the Eighteenth Century we proposed a Philosophy and adopted a Constitution far in advance of the political practice of the day, and set up a government of which Europe predicted the early downfall. Nevertheless, thanks partly to good fortune, and to the farseeing wisdom of our early statesmen who perceived that the success of our experiment depended upon the maintenance of an isolation from European affairs, we established democracy as a practical form of government.

We have not always lived up to our beliefs in ideas. In our dealings with other nations, we yielded often to imperialistic ambitions and thus, to a certain extent, justified the cynicism of Europe. We took what we wanted—and more. From Spain we seized western Florida; the annexation of Texas and the subsequent war with Mexico are acts upon which we cannot look back with unmixed democratic pride; while more than once we professed a naive willingness to fight England in order to push our boundaries further north. We regarded the Monroe Doctrine as altruistic, while others smiled. But it suited England, and her sea power gave it force.

Our war with Spain in 1898, however, was fought for an idea, and, despite the imperialistic impulse that followed it, marks a transition, an advance, in international ethics. Imperialistic cynics were not lacking to scoff at our protestation that we were fighting Spain in order to liberate Cuba; and yet this, for the American people at large, was undoubtedly the inspiration of the war. We kept our promise, we did not annex Cuba, we introduced into international affairs what is known as the Big Brother idea. Then came the Platt Amendment. Cuba was free, but she must not wallow near our shores in an unhygienic state, or borrow money without our consent. We acquired valuable naval bases. Moreover, the sudden and unexpected acquisition of Porto Rico and the Philippines made us imperialists in spite of ourselves.

Nations as well as individuals, however, must be judged by their intentions. The sound public opinion of our people has undoubtedly remained in favour of ultimate self-government for the Philippines, and the greatest measure of self-determination for little Porto Rico; it has been unquestionably opposed to commercial exploitation of the islands, desirous of yielding to these peoples the fruits of their labour in developing the resources of their own lands....