An Essay on Satire, Particularly on the Dunciad 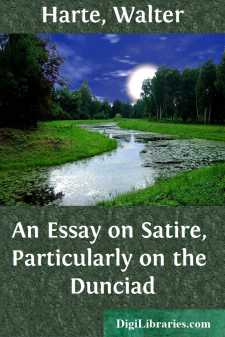 Since the first publication of Walter Harte's An Essay on Satire, Particularly on the Dunciad,[] it has reappeared more than once: the unsold sheets of the first edition were included in A Collection of Pieces in Verse and Prose, Which Have Been Publish'd on Occasion of the Dunciad (1732), and the Essay is also found in at least three late eighteenth- or early nineteenth-century collections of poetry.[] For several reasons, however, it makes sense to reprint the Essay again. The three collections are scarce and have forbiddingly small type; I know of no other twentieth-century reprinting; and, perhaps most important, Aubrey Williams claims that "the critical value for the Dunciad of Harte's poem has not been fully appreciated."[] Its value can best be substantiated, or disputed, if it is rescued from its typographical limbo in the collections and reprinted from its more attractive first edition.

Probably the immediate reason for the Essay was Harte's admiration for Pope, which arose in part from personal gratitude. On 9 February 1727, Harte wrote an unidentified correspondent that "Mr. Pope was pleased to correct every page" of his forthcoming Poems on Several Occasions "with his own hand." Furthermore, Harte may have learned that Pope had petitioned Lady Sarah Cowper, in 1728, to use her influence to obtain him a fellowship in Exeter College, Oxford.[]

But however appealing the Essay may be as an installment on Harte's debt to Pope, there must obviously be better reasons for reprinting it. Harte himself doubtless had additional reasons for writing it. To understand them and the poem, we must also understand, at least in broad outline, the two traditional ways of evaluating satire which Harte and others of his age had inherited. One of them was distinctly at odds with Harte's aims; to the other he gave his support and made his own contribution.

One tradition stressed the "lowness" of satire, in itself and compared with other genres. This tradition, moreover, had at least two sources: the practice of Elizabethan satirists and the critical custom of assigning satire to a middle or low position in the hierarchy of genres.

From the time of Piers Plowman, it was characteristic of English satirists "to taxe the common abuses and vice of the people in rough and bitter speaches."[] This native character was reenforced by the Elizabethan assumption that there should be similarities between satire and its supposed etymological forebears—the satyrs, legendary half men, half goats of ancient Greece. Believing that the Roman satirists Persius and Juvenal had imitated the uncouth manners and vituperative diction of the satyrs, Elizabethan satirists likewise strove to be as rough, harsh, and licentious as possible.[] Despite the objections to the satire-satyr etymology stated by Isaac Casaubon,[] scurrilous satire, especially as a political weapon, was a recognizable subspecies in England at least to 1700. The anonymous author, for instance, of A Satyr Against Common-Wealths (1684) contended in his preface that it is "as disagreeable to see a Satyr Cloath'd in soft and effeminate Language, as to see a Woman scold and vent her self in Billingsgate Rhetorick in a gentile and advantageous Garb." But as Harte certainly realized, The Dunciad differed greatly from unvarnished abuse, and thus required different standards of critical judgment....