An Essay on Criticism 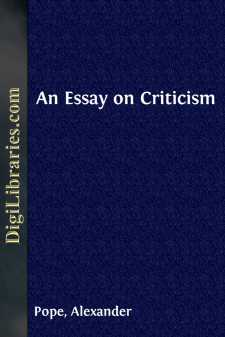 This eminent English poet was born in London, May 21, 1688. His parents were Roman Catholics, and to this faith the poet adhered, thus debarring himself from public office and employment. His father, a linen merchant, having saved a moderate competency, withdrew from business, and settled on a small estate he had purchased in Windsor Forest. He died at Chiswick, in 1717. His son shortly afterwards took a long lease of a house and five acres of land at Twickenham, on the banks of the Thames, whither he retired with his widowed mother, to whom he was tenderly attached and where he resided till death, cultivating his little domain with exquisite taste and skill, and embellishing it with a grotto, temple, wilderness, and other adjuncts poetical and picturesque. In this famous villa Pope was visited by the most celebrated wits, statesmen and beauties of the day, himself being the most popular and successful poet of his age. His early years were spent at Binfield, within the range of the Royal Forest. He received some education at little Catholic schools, but was his own instructor after his twelfth year. He never was a profound or accurate scholar, but he read Latin poets with ease and delight, and acquired some Greek, French, and Italian. He was a poet almost from infancy, he "lisped in numbers," and when a mere youth surpassed all his contemporaries in metrical harmony and correctness. His pastorals and some translations appeared in 1709, but were written three or four years earlier. These were followed by the Essay on Criticism, 1711; Rape of the Lock (when completed, the most graceful, airy, and imaginative of his works), 1712-1714; Windsor Forest, 1713; Temple of Fame, 1715. In a collection of his works printed in 1717 he included the Epistle of Eloisa and Elegy on an Unfortunate Lady, two poems inimitable for pathetic beauty and finished melodious versification.

From 1715 till 1726 Pope was chiefly engaged on his translations of the Iliad and Odyssey, which, though wanting in time Homeric simplicity, naturalness, and grandeur, are splendid poems. In 1728-29 he published his greatest satire—the Dunciad, an attack on all poetasters and pretended wits, and on all other persons against whom the sensitive poet had conceived any enmity. In 1737 he gave to the world a volume of his Literary Correspondence, containing some pleasant gossip and observations, with choice passages of description but it appears that the correspondence was manufactured for publication not composed of actual letters addressed to the parties whose names are given, and the collection was introduced to the public by means of an elaborate stratagem on the part of the scheming poet. Between the years 1731 and 1739 he issued a series of poetical essays moral and philosophical, with satires and imitations of Horace, all admirable for sense, wit, spirit and brilliancy of these delightful productions, the most celebrated is the Essay on Man to which Bolingbroke is believed to have contributed the spurious philosophy and false sentiment, but its merit consists in detached passages, descriptions, and pictures....