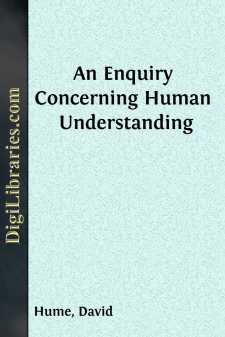 102. I was lately engaged in conversation with a friend who loves sceptical paradoxes; where, though he advanced many principles, of which I can by no means approve, yet as they seem to be curious, and to bear some relation to the chain of reasoning carried on throughout this enquiry, I shall here copy them from my memory as accurately as I can, in order to submit them to the judgement of the reader.

Our conversation began with my admiring the singular good fortune of philosophy, which, as it requires entire liberty above all other privileges, and chiefly flourishes from the free opposition of sentiments and argumentation, received its first birth in an age and country of freedom and toleration, and was never cramped, even in its most extravagant principles, by any creeds, concessions, or penal statutes. For, except the banishment of Protagoras, and the death of Socrates, which last event proceeded partly from other motives, there are scarcely any instances to be met with, in ancient history, of this bigotted jealousy, with which the present age is so much infested. Epicurus lived at Athens to an advanced age, in peace and tranquillity: Epicureans were even admitted to receive the sacerdotal character, and to officiate at the altar, in the most sacred rites of the established religion: And the public encouragement of pensions and salaries was afforded equally, by the wisest of all the Roman emperors, to the professors of every sect of philosophy. How requisite such kind of treatment was to philosophy, in her early youth, will easily be conceived, if we reflect, that, even at present, when she may be supposed more hardy and robust, she bears with much difficulty the inclemency of the seasons, and those harsh winds of calumny and persecution, which blow upon her.

You admire, says my friend, as the singular good fortune of philosophy, what seems to result from the natural course of things, and to be unavoidable in every age and nation. This pertinacious bigotry, of which you complain, as so fatal to philosophy, is really her offspring, who, after allying with superstition, separates himself entirely from the interest of his parent, and becomes her most inveterate enemy and persecutor. Speculative dogmas of religion, the present occasions of such furious dispute, could not possibly be conceived or admitted in the early ages of the world; when mankind, being wholly illiterate, formed an idea of religion more suitable to their weak apprehension, and composed their sacred tenets of such tales chiefly as were the objects of traditional belief, more than of argument or disputation. After the first alarm, therefore, was over, which arose from the new paradoxes and principles of the philosophers; these teachers seem ever after, during the ages of antiquity, to have lived in great harmony with the established superstition, and to have made a fair partition of mankind between them; the former claiming all the learned and wise, the latter possessing all the vulgar and illiterate.

103. It seems then, say I, that you leave politics entirely out of the question, and never suppose, that a wise magistrate can justly be jealous of certain tenets of philosophy, such as those of Epicurus, which, denying a divine existence, and consequently a providence and a future state, seem to loosen, in a great measure, the ties of morality, and may be supposed, for that reason, pernicious to the peace of civil society....