An Elementary Study of Chemistry 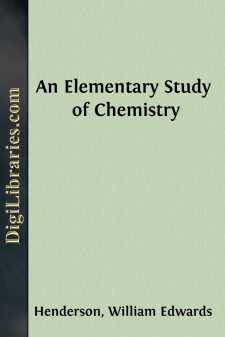 In offering this book to teachers of elementary chemistry the authors lay no claim to any great originality. It has been their aim to prepare a text-book constructed along lines which have become recognized as best suited to an elementary treatment of the subject. At the same time they have made a consistent effort to make the text clear in outline, simple in style and language, conservatively modern in point of view, and thoroughly teachable.

The question as to what shall be included in an elementary text on chemistry is perhaps the most perplexing one which an author must answer. While an enthusiastic chemist with a broad understanding of the science is very apt to go beyond the capacity of the elementary student, the authors of this text, after an experience of many years, cannot help believing that the tendency has been rather in the other direction. In many texts no mention at all is made of fundamental laws of chemical action because their complete presentation is quite beyond the comprehension of the student, whereas in many cases it is possible to present the essential features of these laws in a way that will be of real assistance in the understanding of the science. For example, it is a difficult matter to deduce the law of mass action in any very simple way; yet the elementary student can readily comprehend that reactions are reversible, and that the point of equilibrium depends upon, rather simple conditions. The authors believe that it is worth while to present such principles in even an elementary and partial manner because they are of great assistance to the general student, and because they make a foundation upon which the student who continues his studies to more advanced courses can securely build.

The authors have no apologies to make for the extent to which they have made use of the theory of electrolytic dissociation. It is inevitable that in any rapidly developing science there will be differences of opinion in regard to the value of certain theories. There can be no question, however, that the outline of the theory of dissociation here presented is in accord with the views of the very great majority of the chemists of the present time. Moreover, its introduction to the extent to which the authors have presented it simplifies rather than increases the difficulties with which the development of the principles of the science is attended.

The problems appended to the various chapters have been chosen with a view not only of fixing the principles developed in the text in the mind of the student, but also of enabling him to answer such questions as arise in his laboratory work. They are, therefore, more or less practical in character. It is not necessary that all of them should be solved, though with few exceptions the lists are not long. The answers to the questions are not directly given in the text as a rule, but can be inferred from the statements made. They therefore require independent thought on the part of the student.

With very few exceptions only such experiments are included in the text as cannot be easily carried out by the student. It is expected that these will be performed by the teacher at the lecture table. Directions for laboratory work by the student are published in a separate volume.

While the authors believe that the most important function of the elementary text is to develop the principles of the science, they recognize the importance of some discussion of the practical application of these principles to our everyday life. Considerable space is therefore devoted to this phase of chemistry. The teacher should supplement this discussion whenever possible by having the class visit different factories where chemical processes are employed.

Although this text is now for the first time offered to teachers of elementary chemistry, it has nevertheless been used by a number of teachers during the past three years. The present edition has been largely rewritten in the light of the criticisms offered, and we desire to express our thanks to the many teachers who have helped us in this respect, especially to Dr....