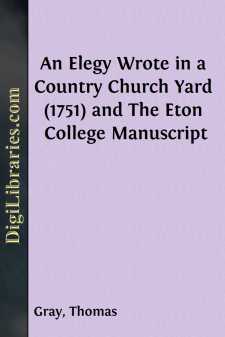 To some the eighteenth-century definition of proper poetic matter is unacceptable; but to any who believe that true poetry may (if not "must") consist in "what oft was thought but ne'er so well expressed," Gray's "Churchyard" is a majestic achievement—perhaps (accepting the definition offered) the supreme achievement of its century. Its success, so the great critic of its day thought, lay in its appeal to "the common reader"; and though no friend of Gray's other work, Dr. Johnson went on to commend the "Elegy" as abounding "with images which find a mirrour in every mind and with sentiments to which every bosom returns an echo." Universality, clarity, incisive lapidary diction—these qualities may be somewhat staled in praise of the "classical" style, yet it is precisely in these traits that the "Elegy" proves most nobly. The artificial figures of rhetorical arrangement that are so omnipresent in the antitheses, chiasmuses, parallelisms, etc., of Pope and his school are in Gray's best quatrains unobtrusive or even infrequent.

Often in the art of the period an affectation of simplicity covers and reveals by turns a great thirst for ingenuity. Swift's prose is a fair example; in the "Tale of a Tub" and even in "Gulliver" at first sight there seems to appear only an honest and simple directness; but pry beneath the surface statements, or allow yourself to be dazzled by their coruscations of meaning, and you immediately see you are watching a stylistic prestidigitator. The later, more orderly dignity of Dr. Johnson's exquisitely chosen diction is likewise ingeniously studied and self-conscious. When Gray soared into the somewhat turgid pindaric tradition of his day, he too was slaking a thirst for rhetorical complexities. But in the "Elegy" we have none of that. Nor do we have artifices like the "chaste Eve" or the "meek-eyed maiden" apostrophized in Collins and Joseph Warton. For Gray the hour when the sky turns from opal to dusk leaves one not "breathless with adoration," but moved calmly to placid reflection tuned to drowsy tinklings or to a moping owl. It endures no contortions of image or of verse. It registers the sensations of the hour and the reflections appropriate to it—simply.

It is not difficult to be clear—so we are told by some who habitually fail of that quality—if you have nothing subtle to say. And it has been urged on high authority in our day that there is nothing really "fine" in Gray's "Churchyard." However conscious Gray was in limiting his address to "the common reader," we may be certain he was not writing to the obtuse, the illiterate or the insensitive. He was to create an evocation of evening: the evening of a day and the approaching night of life. The poem was not to be perplexed by doubt; it ends on a note of "trembling hope"—but on "hope." There are perhaps better evocations of similar moods, but not of this precise mood. Shakespeare's poignant Sonnet LXXIII ("That time of year"), which suggests no hope, may be one. Blake's "Nurse's Song" is, in contrast, subtly tinged with modernistic disillusion:

When the voices of children are heard on the greenAnd whisp'rings are in the dale,The days of my youth rise fresh in my mind,My face turns green and pale. Then come home, my children, the sun is gone down,And the dews of night arise;Your spring & your day are wasted in play,And your winter and night in disguise.

Here, too, are no tremblings of hope, no sound confidence in the "average" man, such as Gray surprisingly glimpses. One begins to suspect that it is more necessary to be subtle in evocations of despair than in those of hope, even if the hope is tremulous. The mood Gray sought required no obvious subtlety. The nearest approach to Gray (found in Catullus) may likewise be said to be deficient in overtones; but it also comes home to the heart of everyman:

These simple lines convey what Gray's ploughman is achieving for one evening, but not what the rude forefathers have achieved for eternity....