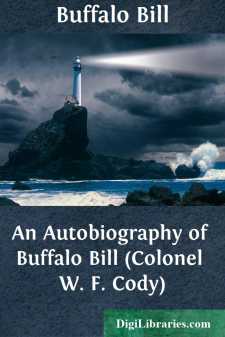 I am about to take the back-trail through the Old West—the West that I knew and loved. All my life it has been a pleasure to show its beauties, its marvels and its possibilities to those who, under my guidance, saw it for the first time.

Now, going back over the ground, looking at it through the eyes of memory, it will be a still greater pleasure to take with me the many readers of this book. And if, in following me through some of the exciting scenes of the old days, meeting some of the brave men who made its stirring history, and listening to my camp-fire tales of the buffalo, the Indian, the stage-coach and the pony-express, their interest in this vast land of my youth, should be awakened, I should feel richly repaid.

The Indian, tamed, educated and inspired with a taste for white collars and moving-pictures, is as numerous as ever, but not so picturesque. On the little tracts of his great inheritance allotted him by civilization he is working out his own manifest destiny.

The buffalo has gone. Gone also is the stagecoach whose progress his pilgrimages often used to interrupt. Gone is the pony express, whose marvelous efficiency could compete with the wind, but not with the harnessed lightning flashed over the telegraph wires. Gone are the very bone-gatherers who laboriously collected the bleaching relics of the great herds that once dotted the prairies.

But the West of the old times, with its strong characters, its stern battles and its tremendous stretches of loneliness, can never be blotted from my mind. Nor can it, I hope, be blotted from the memory of the American people, to whom it has now become a priceless possession.

It has been my privilege to spend my working years on the frontier. I have known and served with commanders like Sherman, Sheridan, Miles, Custer and A.A. Carr—men who would be leaders in any army in any age. I have known and helped to fight with many of the most notable of the Indian warriors.

Frontiersmen good and bad, gunmen as well as inspired prophets of the future, have been my camp companions. Thus, I know the country of which I am about to write as few men now living have known it.

Recently, in the hope of giving permanent form to the history of the Plains, I staged many of the Indian battles for the films. Through the courtesy of the War and Interior Departments I had the help of the soldiers and the Indians.

Now that this work has been done I am again in the saddle and at your service for what I trust will be a pleasant and perhaps instructive journey over the old trails. We shall omit the hazards and the hardships, but often we shall leave the iron roads over which the Pullman rolls and, back in the hills, see the painted Indians winding up the draws, or watch the more savage Mormon Danites swoop down on the wagon-train. In my later years I have brought the West to the East—under a tent. Now I hope to bring the people of the East and of the New West to the Old West, and possibly here and there to supply new material for history....