An Art-Lovers Guide to the Exposition 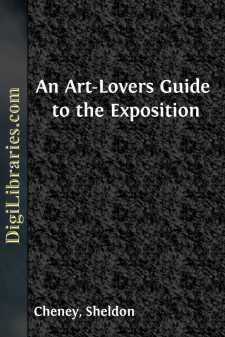 Add to My Favorites
Published: 9 years ago
Downloads: 117
Rating: (0 Votes)

This handbook is designed to furnish the information necessary for intelligent appreciation of the purely artistic features of the Exposition. It is planned first to explain the symbolism of the architecture, sculpture and painting; and second, to point out the special qualities that give each artistic unit its individual appeal. It is made for the intelligent observer who, having enjoyed the purely aesthetic impression of the various works of art, feels a legitimate curiosity about their meaning.

Everything possible has been done to make the volume a guide rather than merely a general treatise. The chapter groupings are the most obviously serviceable ones. Running heads will be found at the tops of the pages, and the sub-headings and catch-titles in each chapter are designed to make reference. to individual features as easy as possible. A complete index is added at the end.

Purely destructive criticism and ridicule have been carefully avoided. But if the writer did not pretend to a power of artistic discrimination which is lacking in the average layman who has not specialized in art and architecture, there would be little excuse for preparing the guide. The praise and criticism alike are such, it is hoped, as will aid the less practiced eye to see new beauties or to establish sounder standards of judgment.

Acknowledgment is made to the official Exposition press bureau for courtesies received, and to those artists who have supplied information about their own work. For obvious reasons no material has been accepted direct from articles and books already published. If certain explanations of the symbolism seem familiar, it is only because all wordings of the ideas echo the artists' interpretations as given out by the press bureau.

Acknowledgment is due also to the Cardinell-Vincent Company, official photographers, since most of the illustrations are from their prints.

The Architecture and Art as a Whole

In the art of the Exposition the great underlying theme is that of achievement. The Exposition is being held to celebrate the building of the Panama Canal, and to exhibit to the world evidences of the progress of civilization in the decade since the last great exposition-a period among the richest in the history of civilization. So the ideas of victory, achievement, progress and aspiration are expressed again and again: in the architecture with its triumphal arches and aspiring towers; in the sculpture that brings East and West face to face, and that shows youth rising with the morning sun, eager and unafraid; and in the mural paintings that portray the march of civilization, and that tell the story of the latest and greatest of mankind's triumphs over nature. But perhaps the most significant thing of all is the wonderfully harmonious and unified effect of the whole, that testifies so splendidly to the perfect co-operation of American architects, sculptors and painters.

The dominant note artistically is harmony. At no other exposition have the buildings seemed to "hold together" so well; and at no other has there been the same perfect unity of artistic impression....