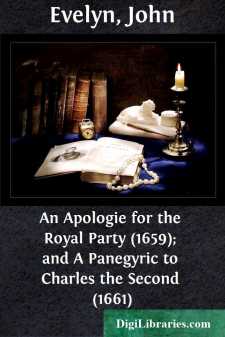 On October 24, 1659, a quarto pamphlet was published in London with the following title: “The Army’s Plea for Their present Practice: tendered to the consideration of all ingenuous and impartial men. Printed and published by special command. London, Printed by Henry Hills, Printer to the Army, dwelling in Aldersgate Street next door to the Peacock. 1659”. Three days afterwards, on October 27, John Evelyn had finished writing an answer, which was published a week later, on November 4, under the title: “An Apologie for the Royal Party ... With a Touch At the pretended Plea for the Army. Anno Dom. MDCLIX”. No author’s name, printer or place was given. Evelyn afterwards made the note in his Diary under the date November 7, 1659, that is, three days after the actual publication: “Was publish’d my bold Apologie for the King in His time of danger, when it was capital to speak or write in favour of him. It was twice printed, so universaly it took.” Evelyn was by conviction an ardent royalist, but by temperament he was peaceable, and the publication of this pamphlet was a courageous act on his part, involving considerable risks.

The Apologie for the Royal Party contains an eloquent and outspoken attack upon the parliamentary party, the depth of the author’s feelings making his style of writing more effective than it usually was.

Events were at this date nearing their climax, and Evelyn, soon after the publication of his pamphlet, made persistent attempts to induce Colonel Henry Morley, then Lieutenant of the Tower of London, to declare for the King. In the edition of Baker’s Chronicle of the Kings of England, edited by Edward Phillips, 1665, is given the following account of the negotiations (p. 736): “Mr. Evelyn gave him [Col. Morley] some visits to attemper his affection by degrees to a confidence in him, & then by consequence to ingage him in his designes; and to induce him the more powerfully thereunto, he put into his hands an excellent and unanswerable hardy treatise by him written and severall times reprinted, intituled An Apology for the Royall Party, which he backed with so good Argument and dextrous Addresses in the prosecution of them, that, after some private discourse, the Colonel was so well inclin’d, as to recommend to him the procurement of his Majestie’s Grace for him, his Brother-in-law Mr. Fagg, and one or two more of his Relations”. Phillips added an account of a letter written by Evelyn to Colonel Morley, and gave him great credit for the influence which he exerted, though Evelyn endorsed a draft of the narrative with a statement saying there “was too much said concerning me”. Nevertheless part of the narrative was confirmed by Evelyn when he on the of the copy of the pamphlet here reproduced: “Delivered to Coll. Morley a few daies after his contest wth Lambert in the palace yard by J. Evelyn”. The “contest” with General Lambert took place on October 12 or 13 when Morley, pistol in hand, refused to allow him at the head of his troops to pass through the Palace Yard.

Evelyn also on the of this copy of his pamphlet “three tymes printed”. In fact there were four printings, all described in the writer’s John Evelyn, a Study in Bibliophily & a Bibliography of his Writings, New York, The Grolier Club, 1937, the one here reproduced being the fourth and final form. Nevertheless all four issues are now extremely scarce, the first printing being known in three copies (one in the United States), the second in seven (two in the United States), the third in one, and the fourth in one. This apparently unique relic of Evelyn’s bold gesture on behalf of his King is in the writer’s possession and is still as issued, edges untrimmed and with its eight leaves stitched in a contemporary paper wrapper. It has been reprinted only in Evelyn’s Miscellaneous Writings, 1825, pp. 169-192.

When Charles II actually returned to England in 1660 Evelyn’s feelings were deeply stirred....