An Annotated Checklist of Nebraskan Bats 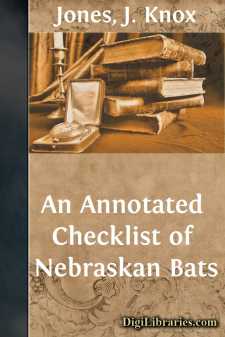 The first mention of bats in Nebraska possibly was by Harrison Allen, in his "Monograph of the Bats of North America" (1864:14, 20, 30, 35, 42), who listed Nycticejus crepuscularis [= Nycticeius humeralis], Lasiurus borealis, Scotophilus carolinensis and Scotophilus fuscus [both = Eptesicus fuscus], and Scotophilus noctivagans [= Lasionycteris noctivagans], as collected in "Nebraska" (then Nebraska Territory) by J. G. Cooper. Henry W. Setzer (in litt.) reports that none of the bats collected by Cooper now exists in the United States National Museum and that no data pertaining to any of them are available except that a single specimen of Nycticeius humeralis was traded to the British Museum in 1866. Cooper journeyed through parts of the present state of Nebraska in the summer and autumn of 1857 and, judging from Taylor's (1919:72-80) report of Cooper's travels, this was the only time he entered any part of Nebraska Territory. The writers are of the opinion that the specimens in question probably were collected in Nebraska; but since Allen listed no exact localities or dates of collection and since the specimens and data pertaining to them are not now available, we have not included them here as Nebraskan records.

In the present paper, Myotis keenii septentrionalis, Myotis lucifugus carissima, and Pipistrellus subflavus subflavus are reported from Nebraska for the first time. Also, the first authentic record of Myotis lucifugus lucifugus is presented, along with additional information on previously reported species. A total number of 169 specimens from Nebraska was available for the present study. This includes almost all of the known specimens preserved in all collections as well as material obtained by us in the past six years.

Nebraska has no natural caves or caverns; however, there are two extensive man-made limestone caves near Louisville, in Cass and Sarpy counties, where four kinds of bats have been found. Two of these are here reported as new to Nebraska. The quarries, one on either side of the Platte River Valley, are in a horizontal stratum of limestone 40 feet in thickness, and are of the room and pillar type; that is to say, the stone has been quarried away leaving rooms having supporting pillars approximately every 50 feet. The average temperatures in summer and winter within these tunnels, recorded over a period of several years by the Ash Grove Lime and Portland Cement Company of Louisville, are 65° F. and 50° F. respectively. The Kiewit Stone Quarry, abandoned since 1936, is one-half mile west of Meadow, Sarpy County, and has one remaining entrance measuring approximately 30 by 30 feet. This quarry has an area of approximately one-fifth square mile and is usually flooded with several feet of water. The other man-made cave, known formerly as the National Stone Quarry, is one mile northeast of Louisville, Cass County. This quarry was abandoned in September, 1938, and until the winter of 1948-1949 had eight or nine entrances and two air shafts. It was approximately one-third square mile in area. All the openings to this quarry were covered in late 1949. Bats were first observed in the National Stone Quarry by one of us (Webb) as early as 1939, less than a year after operations in the quarry ceased.

Records of Nebraskan bats are arranged in two categories; specimens examined and additional records. The latter refer to citations in the literature....