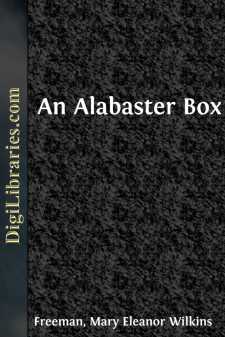 “We,” said Mrs. Solomon Black with weighty emphasis, “are going to get up a church fair and raise that money, and we are going to pay your salary. We can't stand it another minute. We had better run in debt to the butcher and baker than to the Lord.”

Wesley Elliot regarded her gloomily. “I never liked the idea of church fairs very well,” he returned hesitatingly. “It has always seemed to me like sheer beggary.”

Mrs. Solomon Black was a woman who had always had her way. There was not one line which denoted yielding in her large, still handsome face, set about with very elaborate water-waves which she had arranged so many years that her black hair needed scarcely any attention. It would almost seem as if Mrs. Solomon Black had been born with water waves.

She spoke firmly but she smiled, as his mother might have done, at the young man, who had preached his innocent best in Brookville for months without any emolument.

“Now don't you worry one mite about it,” said she. “Church fairs may be begging, but they belong to the history of the United States of America, and I miss my guess if there would have been much preaching of the gospel in a good many places without them. I guess it ain't any worse to hold church fairs in this country than it is to have the outrageous goings on in the old country. I guess we can cheat a little with mats and cakes and things and not stand any more danger of hell-fire than all those men putting each other's eyes out and killing everybody they can hit, and spending the money for guns and awful exploding stuff that ought to go for the good of the world. I ain't worried one mite about church fairs when the world is where it is now. You just run right into your study, Mr. Elliot, and finish your sermon; and there's a pan of hot doughnuts on the kitchen table. You go through the kitchen and get some doughnuts. We had breakfast early and you hadn't ought to work too hard on an empty stomach. You run along. Don't you worry. All this is up to me and Maria Dodge and Abby Daggett and a few others. You haven't got one blessed thing to do with it. All you've got to do is to preach as well as you can, and keep us from a free fight. Almost always there is a fuss when women get up a fair. If you can preach the gospel so we are all on speaking terms when it is finished, you will earn your money twice over. Run along.”

Wesley Elliot obeyed. He always obeyed, at least in the literal sense, when Mrs. Solomon Black ordered him. There was about her a fairly masterly maternity. She loved the young minister as firmly for his own good as if he had been her son. She chuckled happily when she heard him open the kitchen door. “He'll light into those hot doughnuts,” she thought. She loved to pet the boy in the man.

Wesley Elliot in his study upstairs—a makeshift of a study—sat munching hot doughnuts and reflecting. He had only about one-third of his sermon written and it was Saturday, but that did not disturb him....