An Adulteration Act The Lady of the Barge and Others, Part 10. 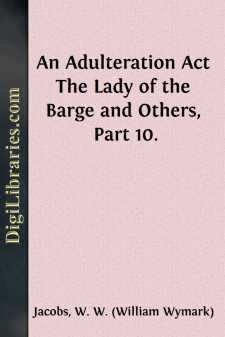 Dr. Frank Carson had been dreaming tantalizing dreams of cooling, effervescent beverages. Over and over again in his dreams he had risen from his bed, and tripping lightly down to the surgery in his pajamas, mixed himself something long and cool and fizzy, without being able to bring the dream to a satisfactory termination.

With a sudden start he awoke. The thirst was still upon him; the materials for quenching it, just down one flight of stairs. He would have smacked his lips at the prospect if they had been moist enough to smack; as it was, he pushed down the bedclothes, and throwing one leg out of bed-became firmly convinced that he was still dreaming.

For the atmosphere was stifling and odorous, and the ceiling descended in an odd bulging curve to within a couple of feet of his head. Still half asleep, he raised his fist and prodded at it in astonishment—a feeling which gave way to one of stupefaction as the ceiling took another shape and swore distinctly.

"I must be dreaming," mused the doctor; "even the ceiling seems alive."

He prodded it again-regarding it closely this time. The ceiling at once rose to greater altitudes, and at the same moment an old face with bushy whiskers crawled under the edge of it, and asked him profanely what he meant by it. It also asked him whether he wanted something for himself, because, if so, he was going the right way to work.

"Where am I?" demanded the bewildered doctor. "Mary! Mary!"

He started up in bed, and brought his head in sudden violent contact with the ceiling. Then, before the indignant ceiling could carry out its threat of a moment before, he slipped out of bed and stood on a floor which was in its place one moment and somewhere else the next.

In the smell of bilge-water, tar, and the foetid atmosphere generally his clouded brain awoke to the fact that he was on board ship, but resolutely declined to inform him how he got there. He looked down in disgust at the ragged clothes which he had on in lieu of the usual pajamas; and then, as events slowly pieced themselves together in his mind, remembered, as the last thing that he could remember, that he had warned his friend Harry Thomson, solicitor, that if he had any more to drink it would not be good for him.

He wondered dimly as he stood whether Thomson was there too, and walking unsteadily round the forecastle, roused the sleepers, one by one, and asked them whether they were Harry Thomson, all answering with much fluency in the negative, until he came to one man who for some time made no answer at all.

The doctor shook him first and then punched him. Then he shook him again and gave him little scientific slaps, until at length Harry Thomson, in a far-away voice, said that he was all right.

The doctor shook him again, and then rolled him backward and forward in his bunk. Under this gentle treatment the solicitor's faculties were somewhat brightened, and, half opening his eyes, he punched viciously at the disturber of his peace, until threatening voices from the gloom promised to murder both of them....