An Account of the Proceedings on the Trial of Susan B. Anthony, on the Charge of Illegal Voting 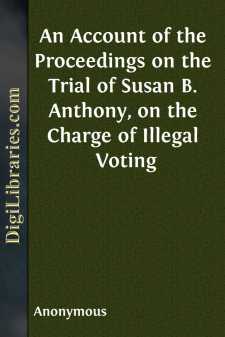 At the election of President and Vice President of the United States, and members of Congress, in November, 1872, Susan B. Anthony, and several other women, offered their votes to the inspectors of election, claiming the right to vote, as among the privileges and immunities secured to them as citizens by the fourteenth amendment to the Constitution of the United States. The inspectors, Jones, Hall, and Marsh, by a majority, decided in favor of receiving the offered votes, against the dissent of Hall, and they were received and deposited in the ballot box. For this act, the women, fourteen in number, were arrested and held to bail, and indictments were found against them severally, under the 19th Section of the Act of Congress of May 30th, 1870, (16 St. at L. 144.) charging them with the offense of "knowingly voting without having a lawful right to vote." The three inspectors were also arrested, but only two of them were held to bail, Hall having been discharged by the Commissioner on whose warrant they were arrested. All three, however were jointly indicted under the same statute—for having "knowingly and wilfully received the votes of persons not entitled to vote."

Of the women voters, the case of Miss Anthony alone was brought to trial, a nolle prosequi having been entered upon the other indictments. Upon the trial of Miss Anthony before the U.S. Circuit Court for the Northern District of New York, at Canandaigua, in June, 1873, it was proved that before offering her vote she was advised by her counsel that she had a right to vote; and that she entertained no doubt, at the time of voting, that she was entitled to vote. It was claimed in her behalf:

I. That she was legally entitled to vote.

II. That if she was not so entitled, but voted in good faith in the belief that it was her right, she was guilty of no crime.

III. That she did vote in such good faith, and with such belief.

The court held that the defendant had no right to vote—that good faith constituted no defence—that there was nothing in the case for the jury to decide, and directed them to find a verdict of guilty; refusing to submit, at the request of the defendant's counsel, any question to the jury, or to allow the clerk to ask the jurors, severally, whether they assented to the verdict which the court had directed to be entered. The verdict of guilty was entered by the clerk, as directed by the court, without any express assent or dissent on the part of the jury. A fine of $100, and costs, was imposed upon the defendant.

Miss Anthony insists that in these proceedings, the fundamental principle of criminal law, that no person can be a criminal unless the mind be so—that an honest mistake is not a crime, has been disregarded; that she has been denied her constitutional right of trial by jury, the jury having had no voice in her conviction; that she has been denied her right to have the response of every juror to the question, whether he did or did not assent to the verdict which the court directed the clerk to enter....