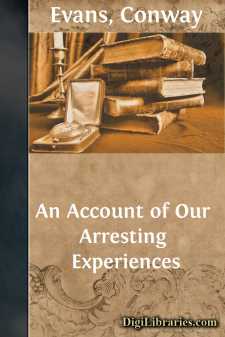 We had been travelling for many weeks,—Lyra Nickerson, Katherine Schermerhorn, and I,—and after a beautiful tour through Germany, we arrived at Berlin on the evening of July 29, 1914. We had planned to spend a few days there preparatory to embarking at Hamburg in the Viktoria Luise for a northern cruise, and were looking forward to a short stay in the splendid capital. When we had secured our rooms at the Hotel Adlon, we found to our dismay that Kitty's box had not come through from Dresden, our last stopping-place. I went downstairs and interviewed the porter. He explained that, owing to the talk of war, many people were leaving their summer quarters, so that traffic was considerably congested. In this wise did the little cloud appear upon our horizon.

The following morning (Thursday) we went sightseeing, and in the afternoon—as Lyra was not feeling well—Kitty and I each went our own way. At five o'clock we met in the hall of the Adlon, where we had tea with her cousin, Mr. Gear, and his friend, Mr. Cluett. Later she and I went to a superb concert at the Frederichshain and heard Thornberg, the violinist.

On Friday morning a little German friend whom I had not seen for many years came to visit me. I asked her if war were likely. She replied: "Certainly not. All danger is now over." This was encouraging, for I thought she knew what she was talking about.

In the afternoon we hired an automobile, and motored out to Potsdam. Then when we were outside the old Palace we heard that the Kaiser's "strong-for-peace" policy had been of no avail, that the Czar had insulted his messenger, and that now war was inevitable. We ourselves, chameleon-like, assumed the German colour. We believed what we were told, and felt sorry for the man who was called upon unwillingly to shed his nation's blood. On our way back to the hotel Kitty and I went to see Mr. Schermerhorn's cousin, Miss Barber, and then we realized the immediate gravity of the situation. She told us that now war must come, and she also told us that the Viktoria Luise would not sail. With quickened pulses we drove back to the Adlon, where the lounge was crowded with buzzing, excited people. Then we dressed, and went to the "Admiral's Palast" to see the exquisite Ice Ballet. While we were admiring the skating, and sympathizing with the fascinating Pierrot whose heart was broken by the cruelty of the dainty jointed Doll, we were able to forget grim reality—to forget that the bonds that had held captive the great Fiend were being cut, and that he was yawning after his long sleep, and stretching his cramped limbs.

The following morning Lyra realized the desirability of leaving Europe and of raising funds. She ordered the car, and we went to the office of the Holland American Line to try and secure the Imperial Suite, but without avail: no passages were to be had. Then we drove to five banks, and cashed a certain amount of her letter of credit at each one. At the Dresdener Bank she was informed that the Czar might capitulate even yet, and that in any case there would be three days of peace. Thereupon our spirits rose, and we began to make wild schemes. Even if Germany and Russia did go to war, why should we not tour in the Ardennes? Belgium would be a nice quiet neutral country to remain in, till we could secure passage to America.

In the afternoon we drove out to Schmockwitz and spent a placid time on the Miggelsee, but when we returned to Berlin we found the Unter der Linden seething with dense crowds of excited people and the whole atmosphere charged with electricity. At dinner Mr. Gear came up to our table. "You had better get out of this as soon as you can," he said. "There is going to be trouble at once."

Sunday morning Kitty was awakened very early by a stormy altercation in the room next to hers. She knocked on the wall, but no notice was taken of her remonstrance. After we had had breakfast, Lyra went downstairs and chartered an auto for 750 marks....