Among the Trees at Elmridge 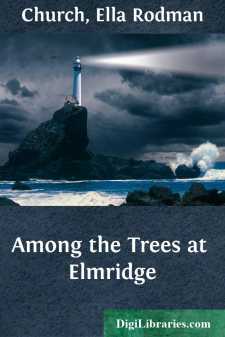 "There is a fruit tree," said Miss Harson, "belonging to an entirely different family, which we have not considered yet; and, although it is not a common tree with us, one specimen of it is to be found in Mrs. Bush's garden, where you have all enjoyed the fruit very much. What is it?"

"Mulberry," said Clara, promptly, while Malcolm was wondering what it could be.

"Oh yes," said Edith, very innocently; "I like to go and see Mrs. Bush when there are mulberries."

Mrs. Bush was not a cheerful person to visit, as she was quite old and rather hard of hearing, and she lived alone in the gloomy old house with the Lombardy poplars in front, where everything looked dark and shut up. A queer woman in a sunbonnet, nearly as old as Mrs. Bush, lived close by, and "kept an eye on her," as she said.

Mrs. Bush's great enjoyment was to have visitors of all ages, to whom she talked a great deal, and cried as she talked, about a daughter who had died a few years ago. The little Kyles did not care to go there except when, as Edith said, there were ripe mulberries; but Mrs. Bush liked very much to have them, and Miss Harson took her little charges there occasionally, because, as she explained to them, it gave pleasure to a lonely old woman, and such visits were just as much charity, though of a different kind, as giving food and clothes to those who need them. The children delighted in the mulberries just because they did not have them at home, although they had fruit that was very much nicer; but Miss Harson never wished even to taste them, although she too had liked them when a little girl.

"The mulberry tree," continued their governess, "belongs to the bread-fruit family, but the other members of this remarkable family, except the Osage orange, are found only in foreign countries. The bread-fruit tree itself, the fig, the Indian fig, or banyan tree, and the deadly upas tree, are all relations of the mulberry."

"Well, trees are queer things," exclaimed Malcolm, "to belong to families that are not a bit alike."

"They are alike in important points, when we examine them carefully," was the reply. "The bread-fruit genus consists, with a single exception, of trees and shrubs with alternate, toothed or lobed or entire leaves and milky juice. This reminds me that the famous cow tree of South America, which yields a large supply of rich and wholesome milk, is one of the members; and you see what a number of famous trees we have on hand now. There are several kinds of mulberries--the red, black, white and paper mulberry, which are all occasionally found in this country, and they were once quite popular here for their shade. The fruit is unusually small for tree-fruit, and very soft when ripe, as you all know; it is not unlike a long, narrow blackberry, and forms, like it, a compound fruit, as though many small berries had grown together. The tree in Mrs. Bush's garden is the black mulberry, as any one might know by the stained lips and hands that sometimes come from there; and it has been cultivated from ancient times for its fine appearance and shade. It is found wild in the forests of Persia, and is thought to have been taken from there to Europe. The tree is more beautiful than useful, for the silkworms do not thrive well on the leaves and the wood is neither strong nor durable."

"Why, I thought," said Clara, "that silkworms always lived on mulberry-leaves?"

"The white mulberry is their favorite food; and another species, called the Morus multicaulis--for Morus is the scientific name of the family--has more delicate leaves than any other, and produces a finer quality of silk. These trees are natives of China, and the white mulberry grows very rapidly to the height of thirty or forty feet. The paper mulberry is so called because in China and Japan--of which it is a native--its bark is manufactured into paper. In the South-Sea Islands, where it is also found, the bark is made into the curious dresses which we sometimes see imported thence. It is a low, thick-branched tree with large light-colored downy leaves and dark-scarlet fruit."

"I wonder," said Malcolm, "if the bark is like birch-bark?"

"It does not look like it," replied Miss Harson, "but it seems to be very much of the same nature. The red mulberry and black mulberry are the most hardy of these trees, and the red mulberry will thrive farther north than any of the family. The wood is valuable for many purposes for which timber is used, and especially in boat-building. And now, as we learned something about silkworms and their cocoons in our talks about insects, there is little more to be said of the mulberry tree which any but learned people would care to know."

See Flyers and Crawlers. Presbyterian Board of Publication.

"I want to hear about the bread tree," said little Edith, "and how the loaves of bread grow on it."

"Do they, Miss Harson?" asked Clara, not exactly seeing how this could be.

"I don't believe they're very hot," remarked Malcolm, who was puzzled over the bread-fruit tree himself, but who laughed at his little sister's idea in a very knowing way. It was not an ill-natured laugh, though, and a glance from his governess always quieted him.

"No, dear," replied Miss Harson, answering Clara; "loaves of bread do not grow on any tree. But I will tell you about the bread-fruit presently; let us finish the Morus family and their kindred in our own country before we go to their foreign relations. The Osage orange is so much used in the United States, and in this part of it, for hedges, on account of its rapid growth and ornamental appearance, that we really ought to know something about it. 'It is a beautiful low, spreading, round-headed tree with the port and splendor of an orange tree. Its oval, entire, polished leaves have the shining green of natives of warmer regions, and its curiously-tesselated, succulent compound fruit the size and golden color of an orange. It was first found in the country of the Osage Indians, from whom it gets its name, and it has since been cultivated in many parts of this country and in Europe. The Osages belonged to the Sioux, or Dacotah, tribe of Indians, and their home was in the south-western part of the old United States. The Osage orange--a tree from thirty to forty feet high with leaves even more bright and glossy than those of the ordinary orange--was first found growing wild near one of their villages."

"But what a very high hedge it would make!" said Malcolm.

"Yes, if left to its natural growth, it would be a very absurd fence indeed. But this is not the case; the branches spread out very widely, and by cutting off the tops and trimming the remainder twice in a season a very handsome thickset hedge is produced, with lustrous leaves and sharp, straight thorns. Another name for this tree is yellow-wood, or bow-wood, because the wood is of a bright-yellow color, and the grain is so fine and elastic that the Southern Indians have been in the habit of using it to make their bows. The experiment of feeding silkworms upon the leaves has been tried, but it was not very successful."

"I suppose the worms didn't know that it belonged to the mulberry family," said Clara, "and I don't see now why it does."

For reply, her governess read:

"'The sap of the young wood and of the leaves is milky and contains a large proportion of caoutchouc.'"

"Oh!" exclaimed Malcolm; "that sounds just like sneezing. What is it, Miss Harson?"

"Something that you wear on your feet and over your shoulders in wet weather; so now guess."

"How many of them do you wear over your shoulders at once?" asked her brother....