Among the Red-skins Over the Rocky Mountains 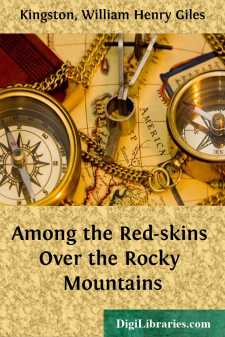 “Hugh, my lad! Hugh, run and tell Madge we have come back,” cried Uncle Donald, as he and I entered the house on our return, one summer’s evening, from a hunting excursion in search of deer or any other game we could come across, accompanied by three of our dogs, Whiskey, Pilot, and Muskymote.

As he spoke, he unstrapped from his shoulders a heavy load of caribou meat. I, having a similar load, did the same—mine was lighter than his—and, Hugh not appearing, I went to the door and again called. No answer came.

“Rose, my bonnie Rose! Madge, I say! Madge! Where are you all?” shouted Uncle Donald, while he hung his rifle, with his powder-horn and shot-pouch, in their accustomed places on the wall.

On glancing round the room he seemed somewhat vexed to perceive that no preparations had been made for supper, which we expected to have found ready for us. It was seldom, however, that he allowed himself to be put out. I think I can see him now—his countenance, though weather-beaten and furrowed by age, wearing its usual placid and benignant expression; while his long silvery beard and the white locks which escaped from beneath his Highland bonnet gave him an especially venerable appearance. His dress was a plaid shooting-coat, and high leggings of well-tanned leather, ornamented with fringe after the fashion of the Indians. Upright as an arrow, with broad shoulders and wiry frame, he stood upwards of six feet in his mocassins, nor did he appear to have lost anything of the strength and energy of youth.

As no one appeared, I ran round to the back of the house, thinking that Rose and Madge, accompanied by Hugh, had gone to bring in the milk, which it was the duty of Sandy McTavish to draw from our cows, and that he, for some cause or other, being later than usual, they had been delayed. I was not mistaken. I presently met them, Madge carrying the pails, and Rose, a fair-haired, blue-eyed little maiden, tripping lightly beside her. She certainly presented a great contrast in appearance to the gaunt, dark-skinned Indian woman, whose features, through sorrow and hardship, had become prematurely old. I inquired for Hugh.

“Is he not with you?” asked Rose, in a tone of some little alarm. “He went off two hours ago, saying that he should be sure to fall in with you, and would assist in bringing home the game you might have killed.”

“Yes, Hugh would go. What he will he do,” said the Indian woman, in the peculiar way of speaking used by most of her people.

“He felt so much better in the afternoon that he was eager to go out and help you,” said Rose. “He thought that Uncle Donald would not be angry with him, though he had told him to remain at home.”

We soon got back to the house. When Uncle Donald heard where Hugh had gone, though he expressed no anger, he looked somewhat troubled. He waited until Rose had gone out of the room, then he said to me—

“I noticed, about four miles from home, as we went out in the morning, the marks of a ‘grizzly,’ which had been busy grubbing up a rotten log, but as his trail appeared to lead away up the mountains to the eastward I did not think it worth my while to chase him; and you having just before separated from me, I forgot to mention the fact when you came back. But vexed would I be if Hugh should have fallen in with the brute....