Among My Books Second Series 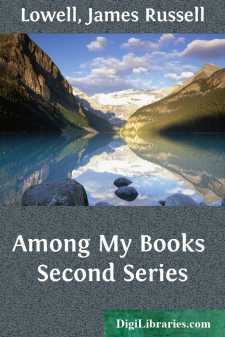 On the banks of a little river so shrunken by the suns of summer that it seems fast passing into a tradition, but swollen by the autumnal rains with an Italian suddenness of passion till the massy bridge shudders under the impatient heap of waters behind it, stands a city which, in its period of bloom not so large as Boston, may well rank next to Athens in the history which teaches come l' uom s' eterna.

Originally only a convenient spot in the valley where the fairs of the neighboring Etruscan city of Fiesole were held, it gradually grew from a huddle of booths to a town, and then to a city, which absorbed its ancestral neighbor and became a cradle for the arts, the letters, the science, and the commerce[2] of modern Europe. For her Cimabue wrought, who infused Byzantine formalism with a suggestion of nature and feeling; for her the Pisani, who divined at least, if they could not conjure with it, the secret of Greek supremacy in sculpture; for her the marvellous boy Ghiberti proved that unity of composition and grace of figure and drapery were never beyond the reach of genius;[3] for her Brunelleschi curved the dome which Michel Angelo hung in air on St. Peter's; for her Giotto reared the bell-tower graceful as an Horatian ode in marble; and the great triumvirate of Italian poetry, good sense, and culture called her mother. There is no modern city about which cluster so many elevating associations, none in which the past is so contemporary with us in unchanged buildings and undisturbed monuments. The house of Dante is still shown; children still receive baptism at the font (il mio bel San Giovanni) where he was christened before the acorn dropped that was to grow into a keel for Columbus; and an inscribed stone marks the spot where he used to sit and watch the slow blocks swing up to complete the master-thought of Arnolfo. In the convent of St. Mark hard by lived and labored Beato Angelico, the saint of Christian art, and Fra Bartolommeo, who taught Raphael dignity. From the same walls Savonarola went forth to his triumphs, short-lived almost as the crackle of his martyrdom. The plain little chamber of Michel Angelo seems still to expect his return; his last sketches lie upon the table, his staff leans in the corner, and his slippers wait before the empty chair. On one of the vine-clad hills, just without the city walls, one's feet may press the same stairs that Milton climbed to visit Galileo. To an American there is something supremely impressive in this cumulative influence of the past full of inspiration and rebuke, something saddening in this repeated proof that moral supremacy is the only one that leaves monuments and not ruins behind it. Time, who with us obliterates the labor and often the names of yesterday, seems here to have spared almost the prints of the care piante that shunned the sordid paths of worldly honor.

Around the courtyard of the great Museum of Florence stand statues of her illustrious dead, her poets, painters, sculptors, architects, inventors, and statesmen; and as the traveller feels the ennobling lift of such society, and reads the names or recognizes the features familiar to him as his own threshold, he is startled to find Fame as commonplace here as Notoriety everywhere else, and that this fifth-rate city should have the privilege thus to commemorate so many famous men her sons, whose claim to pre-eminence the whole world would concede....