Among My Books First Series 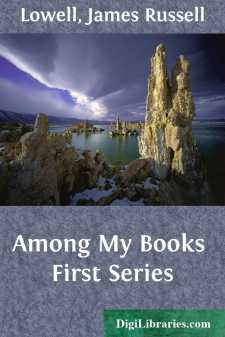 Benvenuto Cellini tells us that when, in his boyhood, he saw a salamander come out of the fire, his grandfather forthwith gave him a sound beating, that he might the better remember so unique a prodigy. Though perhaps in this case the rod had another application than the autobiographer chooses to disclose, and was intended to fix in the pupil's mind a lesson of veracity rather than of science, the testimony to its mnemonic virtue remains. Nay, so universally was it once believed that the senses, and through them the faculties of observation and retention, were quickened by an irritation of the cuticle, that in France it was customary to whip the children annually at the boundaries of the parish, lest the true place of them might ever be lost through neglect of so inexpensive a mordant for the memory. From this practice the older school of critics would seem to have taken a hint for keeping fixed the limits of good taste, and what was somewhat vaguely called classical English. To mark these limits in poetry, they set up as Hermae the images they had made to them of Dryden, of Pope, and later of Goldsmith. Here they solemnly castigated every new aspirant in verse, who in turn performed the same function for the next generation, thus helping to keep always sacred and immovable the ne plus ultra alike of inspiration and of the vocabulary. Though no two natures were ever much more unlike than those of Dryden and Pope, and again of Pope and Goldsmith, and no two styles, except in such externals as could be easily caught and copied, yet it was the fashion, down even to the last generation, to advise young writers to form themselves, as it was called, on these excellent models. Wordsworth himself began in this school; and though there were glimpses, here and there, of a direct study of nature, yet most of the epithets in his earlier pieces were of the traditional kind so fatal to poetry during great part of the last century; and he indulged in that alphabetic personification which enlivens all such words as Hunger, Solitude, Freedom, by the easy magic of an initial capital.

"Where the green apple shrivels on the spray,  And pines the unripened pear in summer's kindliest ray,  Even here Content has fixed her smiling reign  With Independence, child of high Disdain.  Exulting 'mid the winter of the skies,  Shy as the jealous chamois, Freedom flies,  And often grasps her sword, and often eyes."

Here we have every characteristic of the artificial method, even to the triplet, which Swift hated so heartily as "a vicious way of rhyming wherewith Mr. Dryden abounded, imitated by all the bad versifiers of Charles the Second's reign." Wordsworth became, indeed, very early the leader of reform; but, like Wesley, he endeavored a reform within the Establishment. Purifying the substance, he retained the outward forms with a feeling rather than conviction that, in poetry, substance and form are but manifestations of the same inward life, the one fused into the other in the vivid heat of their common expression. Wordsworth could never wholly shake off the influence of the century into which he was born. He began by proposing a reform of the ritual, but it went no further than an attempt to get rid of the words of Latin original where the meaning was as well or better given in derivatives of the Saxon. He would have stricken out the "assemble" and left the "meet together." Like Wesley, he might be compelled by necessity to a breach of the canon; but, like him, he was never a willing schismatic, and his singing robes were the full and flowing canonicals of the church by law established. Inspiration makes short work with the usage of the best authors and ready-made elegances of diction; but where Wordsworth is not possessed by his demon, as Molière said of Corneille, he equals Thomson in verbiage, out-Miltons Milton in artifice of style, and Latinizes his diction beyond Dryden. The fact was, that he took up his early opinions on instinct, and insensibly modified them as he studied the masters of what may be called the Middle Period of English verse.[2] As a young man, he disparaged Virgil ("We talked a great deal of nonsense in those days," he said when taken to task for it later in life); at fifty-nine he translated three books of the Aeneid, in emulation of Dryden, though falling far short of him in everything but closeness, as he seems, after a few years, to have been convinced. Keats was the first resolute and wilful heretic, the true founder of the modern school, which admits no cis-Elizabethan authority save Milton, whose own English was formed upon those earlier models. Keats denounced the authors of that style which came in toward the close of the seventeenth century, and reigned absolute through the whole of the eighteenth, as

"A schism,  Nurtured by foppery and barbarism,  … who went about  Holding a poor decrepit standard out,  Marked with most flimsy mottoes, and in large  The name of one Boileau!"

But Keats had never then[3] studied the writers of whom he speaks so contemptuously, though he might have profited by so doing....