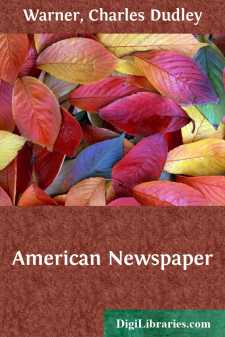 Our theme for the hour is the American Newspaper. It is a subject in which everybody is interested, and about which it is not polite to say that anybody is not well informed; for, although there are scattered through the land many persons, I am sorry to say, unable to pay for a newspaper, I have never yet heard of anybody unable to edit one.

The topic has many points of view, and invites various study and comment. In our limited time we must select one only. We have heard a great deal about the power, the opportunity, the duty, the "mission," of the press. The time has come for a more philosophical treatment of it, for an inquiry into its relations to our complex civilization, for some ethical account of it as one of the developments of our day, and for some discussion of the effect it is producing, and likely to produce, on the education of the people. Has the time come, or is it near at hand, when we can point to a person who is alert, superficial, ready and shallow, self-confident and half-informed, and say, "There is a product of the American newspaper"? The newspaper is not a willful creation, nor an isolated phenomenon, but the legitimate outcome of our age, as much as our system of popular education. And I trust that some competent observer will make, perhaps for this association, a philosophical study of it. My task here is a much humbler one. I have thought that it may not be unprofitable to treat the newspaper from a practical and even somewhat mechanical point of view.

The newspaper is a private enterprise. Its object is to make money for its owner. Whatever motive may be given out for starting a newspaper, expectation of profit by it is the real one, whether the newspaper is religious, political, scientific, or literary. The exceptional cases of newspapers devoted to ideas or "causes" without regard to profit are so few as not to affect the rule. Commonly, the cause, the sect, the party, the trade, the delusion, the idea, gets its newspaper, its organ, its advocate, only when some individual thinks he can see a pecuniary return in establishing it.

This motive is not lower than that which leads people into any other occupation or profession. To make a living, and to have a career, is the original incentive in all cases. Even in purely philanthropical enterprises the driving-wheel that keeps them in motion for any length of time is the salary paid the working members. So powerful is this incentive that sometimes the wheel will continue to turn round when there is no grist to grind. It sometimes happens that the friction of the philanthropic machinery is so great that but very little power is transmitted to the object for which the machinery was made. I knew a devoted agent of the American Colonization Society, who, for several years, collected in Connecticut just enough, for the cause, to buy his clothes, and pay his board at a good hotel.

It is scarcely necessary to say, except to prevent a possible misapprehension, that the editor who has no high ideals, no intention of benefiting his fellow-men by his newspaper, and uses it unscrupulously as a means of money-making only, sinks to the level of the physician and the lawyer who have no higher conception of their callings than that they offer opportunities for getting money by appeals to credulity, and by assisting in evasions of the law....