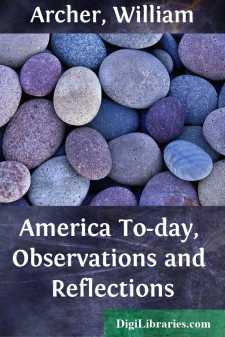 The Straits of New York—When is a Ship not a Ship?—Nationality of Passengers—A Dream Realized.

The Atlantic Ocean is geographically a misnomer, socially and politically a dwindling superstition. That is the chief lesson one learns—and one has barely time to take it in—between Queenstown and Sandy Hook. Ocean forsooth! this little belt of blue water that we cross before we know where we are, at a single hop-skip-and-jump! From north to south, perhaps, it may still count as an ocean; from east to west we have narrowed it into a strait. Why, even for the seasick (and on this point I speak with melancholy authority) the Atlantic has not half the terrors of the Straits of Dover; comfort at sea being a question, not of the size of the waves, but of the proportion between the size of the waves and the size of the ship. Our imagination is still beguiled by the fuss the world made over Columbus, whose exploit was intellectually and morally rather than physically great. The map-makers, too, throw dust in our eyes by their absurd figment of two "hemispheres," as though Nature had sliced her orange in two, and held one half in either hand. We are slow to realise, in fact, that time is the only true measure of space, and that London to-day is nearer to New York than it was to Edinburgh a hundred and fifty years ago. The essential facts of the case, as they at present stand, would come home much more closely to the popular mind of both continents if we called this strip of sea the Straits of New York, and classed our liners, not as the successors of Columbus's caravels, but simply as what they are: giant ferry-boats plying with clockwork punctuality between the twin landing-stages of the English-speaking world.

To-morrow we shall be in New York harbour; it seems but yesterday that we slipped out of the Cove of Cork. As I look at the chart on the companion staircase, where our daily runs are marked off, I feel the abject poverty of our verbs of speed. We have not rushed, or dashed, or hurtled along—these words do grave injustice to the majesty of our progress. I can think of nothing but the strides of some Titan, so vast as to beggar even the myth-making imagination. It is not seven-league, no, nor hundred-league boots that we wear—we do our 520, 509, 518, 530 knots at a stride. Nor is it to be imagined that we are anywhere near the limit of speed. Already the Lucania's record is threatened by the Oceanic; and the Oceanic, if she fulfils her promises, will only spur on some still swifter Titan to the emprise. Then, again, it is hard to believe that the difficulties are insuperable which as yet prevent us from utilising, as a point of arrival and departure, that almost mid-Atlantic outpost of the younger world, Newfoundland—or at the least Nova Scotia. By this means the actual waterway between the two continents will be shortened by something like a third. What with the acceleration of the ferry-boats and the narrowing of the ferry, it is surely no visionary Jules-Vernism to look forward to the time when one may set foot on American soil, within, say, sixty-five hours of leaving the Liverpool landing-stage; supposing, that is to say, that steam navigation be not in the meantime superseded....