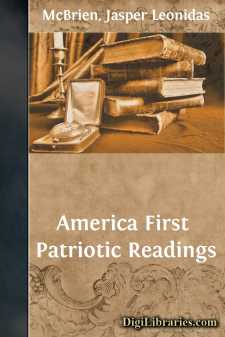 This dramatization of the Continental Congress portrays the spirit of the times during the period of the American Revolution. It deals principally with the debates for and against the Declaration of Independence; it is a summary of the grievances, struggles, sacrifices, and victories of the colonies from the enactment of the obnoxious Stamp Act by the British Parliament to the resignation of George Washington as commander-in-chief of the American army.

In the construction of a drama covering such a heroic period and relating to events so momentous, all of which must pass in review before us within an hour and a half's time, it is necessary to exercise a certain dramatic license. The historical literalist, like the scriptural literalist, makes the letter kill the spirit of the truth. After all, it is not the dry facts, dates, and mechanics of history that are of greatest importance; it is the fundamental principles, causes, and effects underlying the events as well as the spirit of the times, that are of first consideration.

Any modification of historical fact in this dramatization has been made only to give a fuller meaning to the great facts of history touched upon therein. It is the period of the American Revolution that is to be portrayed, as already stated—not alone those memorable days of June and July, 1776, during which the debates on the Declaration of Independence took place. For example, Patrick Henry was a member of the First and the Second Continental Congress, though not a member at the time the Declaration of Independence was debated, Washington was a member of the First Continental Congress, but Jefferson was not. Congress was a changing body in its membership then as is our Congress to-day.

Jefferson declares that Patrick Henry was the man who put the ball of the American Revolution in motion. Not to give Henry a place in this dramatization would be like the play of "Hamlet" with Hamlet left out.

It must be remembered that no record was made of the debates in the Continental Congress as is done verbatim by expert reporters in Congress to-day and published in the Congressional Record. Therefore, the speeches herein have been adapted from such sources as Paine's "Separation of Britain and America," Webster's "Supposed Speech of John Adams," "Wirt's Supposed Speech of Patrick Henry," Alexander H. Stephens's "Corner Stone Speech," Webster's "Supposed Speech of Opposition to Independence," and Sumner's "True Grandeur of Nations." The dialogue between Jefferson and Adams is taken from a letter of John Adams to Timothy Pickering, dated August 6, 1822. The speeches of Stephens and Sumner are paraphrased to suit the times to which they are here applied.

Great care has been exercised to place each of the leading characters in these debates on the side in which he at that time conscientiously believed. In the roll call in this drama on the vote for independence, the history of each colony has been thoroughly studied so as to bring out the changed attitude of the people of the various colonies toward independence, as well as of certain members of the Continental Congress on this question....