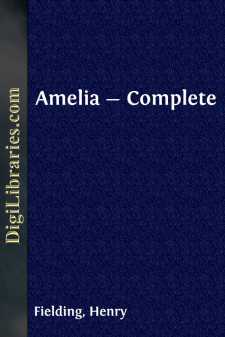 Fielding's third great novel has been the subject of much more discordant judgments than either of its forerunners. If we take the period since its appearance as covering four generations, we find the greatest authority in the earliest, Johnson, speaking of it with something more nearly approaching to enthusiasm than he allowed himself in reference to any other work of an author, to whom he was on the whole so unjust. The greatest man of letters of the next generation, Scott (whose attitude to Fielding was rather undecided, and seems to speak a mixture of intellectual admiration and moral dislike, or at least failure in sympathy), pronounces it "on the whole unpleasing," and regards it chiefly as a sequel to Tom Jones, showing what is to be expected of a libertine and thoughtless husband. But he too is enthusiastic over the heroine. Thackeray (whom in this special connection at any rate it is scarcely too much to call the greatest man of the third generation) overflows with predilection for it, but chiefly, as it would seem, because of his affection for Amelia herself, in which he practically agrees with Scott and Johnson. It would be invidious, and is noways needful, to single out any critic of our own time to place beside these great men. But it cannot be denied that the book, now as always, has incurred a considerable amount of hinted fault and hesitated dislike. Even Mr. Dobson notes some things in it as "unsatisfactory;" Mr. Gosse, with evident consciousness of temerity, ventures to ask whether it is not "a little dull." The very absence of episodes (on the ground that Miss Matthews's story is too closely connected with the main action to be fairly called an episode) and of introductory dissertations has been brought against it, as the presence of these things was brought against its forerunners.

I have sometimes wondered whether Amelia pays the penalty of an audacity which, a priori, its most unfavourable critics would indignantly deny to be a fault. It begins instead of ending with the marriage-bells; and though critic after critic of novels has exhausted his indignation and his satire over the folly of insisting on these as a finale, I doubt whether the demand is not too deeply rooted in the English, nay, in the human mind, to be safely neglected. The essence of all romance is a quest; the quest most perennially and universally interesting to man is the quest of a wife or a mistress; and the chapters dealing with what comes later have an inevitable flavour of tameness, and of the day after the feast. It is not common now-a-days to meet anybody who thinks Tommy Moore a great poet; one has to encounter either a suspicion of Philistinism or a suspicion of paradox if one tries to vindicate for him even his due place in the poetical hierarchy. Yet I suspect that no poet ever put into words a more universal criticism of life than he did when he wrote "I saw from the beach," with its moral of—

"Give me back, give me back, the wild freshness of morning—Her smiles and her tears are worth evening's best light."

If we discard this fallacy boldly, and ask ourselves whether Amelia is or is not as good as Joseph Andrews or Tom Jones, we shall I think be inclined to answer rather in the affirmative than in the negative. It is perhaps a little more easy to find fault with its characters than with theirs; or rather, though no one of these characters has the defects of Blifil or of Allworthy, it is easy to say that no one of them has the charm of the best personages of the earlier books. The idolaters of Amelia would of course exclaim at this sentence as it regards that amiable lady; and I am myself by no means disposed to rank amiability low in the scale of things excellent in woman. But though she is by no means what her namesake and spiritual grand-daughter. Miss Sedley, must, I fear, be pronounced to be, an amiable fool, there is really too much of the milk of human kindness, unrefreshed and unrelieved of its mawkishness by the rum or whisky of human frailty, in her. One could have better pardoned her forgiveness of her husband if she had in the first place been a little more conscious of what there was to forgive; and in the second, a little more romantic in her attachment to him. As it is, he was son homme; he was handsome; he had broad shoulders; he had a sweet temper; he was the father of her children, and that was enough. At least we are allowed to see in Mr. Booth no qualities other than these, and in her no imagination even of any other qualities. To put what I mean out of reach of cavil, compare Imogen and Amelia, and the difference will be felt.

But Fielding was a prose writer, writing in London in the eighteenth century, while Shakespeare was a poet writing in all time and all space, so that the comparison is luminous in more ways than one....