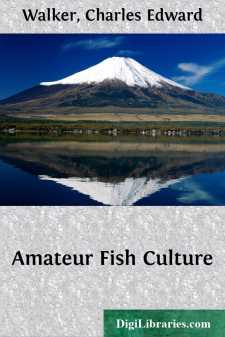 Fish culture of a certain kind dates from very early times, but its scientific development has only come about quite recently. Most people know that in our own country the monks had stew ponds, where they kept fish, principally carp, and also that the Romans kept fish in ponds. In the latter case we hear more often of the eel than of other fish. The breeding of trout and salmon, and the artificial spawning and hatching of ova, are, however, an innovation of our own time.

Much has been discovered about the procreation of fish, and in no case have scientists worked so hard and discovered more than in the case of Salmonidæ. Fish culture, particularly trout culture, has become a trade, and a paying one. To any one who has the least idea of the difficulties to be overcome in rearing Salmonidæ, this fact alone proves that fish culture must have progressed to a very advanced stage as a science.

This advance has in very many, if not in the majority of cases, been made by the bitter experience gained through failures and mishaps, for these have led fish culturists to try many different means to prevent mischances, or to rectify them if they have happened. Some of the most serious difficulties experienced by the early fish culturists who bred Salmonidæ can now be almost disregarded, for they hardly exist for the modern fish culturist, with the knowledge he possesses of the experience of others.

So much of what has been done in fish culture is generally known to those who have studied and practised it, that the beginner can nowadays commence far ahead of the point whence the first fish culturists started. Many of his difficulties have been overcome for him already, and though he will not, of course, meet with the success of the man of experience, still he ought with the exercise of an average amount of intelligence to avoid such failures as would completely disgust him.

There are many pieces of water containing nothing but coarse fish which are very suitable for trout of some kind. Ponds, particularly those which have a stream running through them, will, as a rule, support a good head of trout if properly managed. Again a water which contains trout may become more or less depleted, and here it is necessary to supply the deficiency of trout by some means. The easiest way is, of course, to buy yearling or two-year-old fish from a piscicultural establishment, of which there are many in the kingdom, but I know that there are many fishermen who would much prefer to rear their own fish from the ova, than to buy ready-made fish. Any one who has the time and opportunity to rear his own fish will be amply repaid by the amusement and interest gained, and it should be the cheaper method of stocking or re-stocking a water.

The same remarks apply to a certain extent to waters which will not support trout, or where the owner wants more coarse fish. The stock of coarse fish may be improved by fish culture just as much as a stock of trout.

In his first year or two, it is very possible that the amateur will not save very much by being his own pisciculturist....