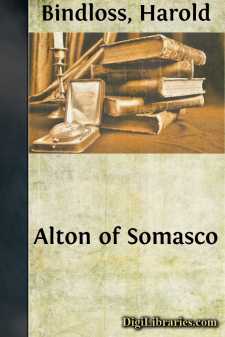 CHAPTER I THE FIRST ENCOUNTER

It was snowing slowly and persistently, as it had done all day, when Henry Alton of Somasco ranch stood struggling with a half-tamed Cayuse pony in a British Columbian settlement. The Cayuse had laid its ears back, and was describing a circle round him, scattering mud and snow, while the man who gripped the bridle in a lean, brown hand watched it without impatience, admiringly.

"Game!" he said. "I like them that way. Still, it isn't every man could seize a pack on him, and you'll have to let up three dollars on the price you asked me."

Now three dollars is a considerable proportion of the value of an Indian pony fresh from the northern grass lands, with the devil that lurks in most of his race still unsubdued within him, but the rancher who owned him did not immediately reject the offer. Possibly he was not especially anxious to keep the beast.

"Oh, yes," said a bystander. "He's game enough, and I'd ask the boys to my funeral if I meant to drive him at night over the lake trail. After being most kicked into wood-pulp Carter hasn't any more use for him, and I'll lay you a dollar, Alton, you and your partner can't put the pack on him."

Perhaps the Cayuse was tired, or desirous of watching for an opportunity, for it came to a standstill, snorting, with its wicked eyes upon the man, who laughed a little and shoved back the broad hat from his forehead as he straightened himself. The laugh rang pleasantly, and the faint twinkle in Alton's eyes was in keeping with it. They were grey, and steady when the light sank out of them, and the rest of the bronzed face was shrewd and quietly masterful. He wore a deerskin jacket fancifully embroidered, blue canvas overalls, and gum boots to the knee, while, though all of them needed repair, the attire was picturesque, and showed its wearer's lean symmetry. The man's age was apparently twenty-five, and eight years' use of the axe had set a stamp of springy suppleness upon him. He had also wrested rather more than a livelihood from the Canadian forest during them.

All round him the loghouses rose in all their unadorned dinginess beneath the sombre pines, and the largest of them bore a straggling legend announcing that it was Horton's store and hotel. A mixed company of bush ranchers, free prospectors, axemen, and miners lounged outside it in picturesque disarray, and high above rose a dim white line of never-melting snow.

"Well," said Alton, "it's time this circus was over, anyway, and if Carter will take my bid I'll clinch that deal with you. Have the pack and seizings handy, Charley."

The rancher nodded, and Alton got a tighter grip on the bridle. Then the Cayuse rose upright with fore-hoofs lifted, and the man's arm was drawn back to strike. The hoofs came down harmlessly, but the fist got home, and for a moment or two there was a swaying and plunging of man and beast amidst the hurled-up snow. Then the Cayuse was borne backwards until the vicinity of the hotel verandah left no room for kicking, and another man hastily flung a rope round the bundles he piled upon its back....