Alphabetical Vocabularies of the Clallum and Lummi 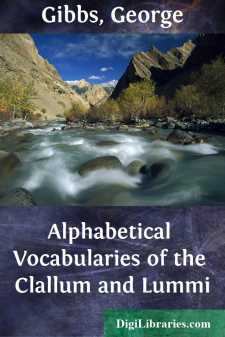 The tribe of Clallams, as they are usually called by the residents of Washington Territory—by the neighboring Indians named S'klal´am, and denominated by themselves NÅ«s-klái yÅ«m—inhabit the southern shore of Fuca Strait, from about the OkÄ•ho River on the west, to Port Townshend on the east, bordering in the first direction on the Makahs, sometimes called Classets (the Klaizzart of Jewitt), a tribe of the Nootka family who inhabit Cape Flattery, and in the other on the Chemakum, like themselves a branch of the Selish, though a yet more remote one. Their language is the same, with some dialectic differences only, as that of the Songhus and Sokes of Vancouver Island opposite. It is this which has been referred to by Drs. Scouler and Latham as the "Nusdalum," undoubtedly, in the first instance, a misprint.

The Clallam differs materially from the other Selish languages of the Puget Sound country, though less from the Lummi than the rest. Its noticeable feature is the frequent occurrence of the nasal ng.

The Lummi tribe live on the lower part of a river heading in the Cascade Range, north-east of Mount Baker, and emptying by two mouths, one into Bellingham Bay, the other into the Gulf of Georgia, the upper waters of which are inhabited by the Nook-sahks (NÅ«k-sák). They are, however, intruders here, their former country having been a part of the group of islands between the continent and Vancouver Island, to which they still occasionally resort. Their own name is NÅ«kh´lum-mi. The Skagits call them NÅ«kh-lésh, and some of the other tribes Há-lum-mi. Their dialectic affinities are rather with the Sannitch of the south-eastern end of Vancouver Island than with any of the Indians of the main land, and the two probably at one period formed a single tribe, which more remotely was connected with the Clallams and Songhus. The Simiahmoo (Si-mi-á-mu), a small remnant, living on the bay of that name, north of them, belong likewise to this group. On the south the Lummi adjoin the Samish and other bands of the Skagits, who in language approach the Nisquallies.

Like the Clallam, their language abounds with the nasal ng, both as a prefix and a termination. It has another peculiarity, in great measure its own, in the broad sound of the letter a, somewhat as in the words mass, pass, but even more prolonged. I have distinguished this in the vocabulary by the italic. The letters f, r, v, z, are wanting in both languages.

The Clallam and Lummi, as will be observed, contain three classes of cardinals, which I have distinguished as simple, personal, and of valuation, although these terms are not strictly accurate; certain objects, besides men, being counted by the second, and others, as well as money, by the third; I have never fully ascertained the distinctions which govern their use. The words animate and inanimate do not apply; those of noble and ignoble, by which the French Missionaries designated the names of objects in the Algonquin languages, probably indicate the idea. Mr. Gallatin, in his "Notes on the Semi-Civilized Nations of Mexico," &c., mentions the same peculiarity as existing in the Mexican and Maya, in the former of which there are three different terminations suffixed to the simple numbers, according to the objects denoted. A similar distinction is found in the Makak language, and traces of it, at least, are observable in the Pima. I imagine that by inquiry the fact would be found to exist in other Indian tongues. Singularly enough, this feature also characterizes some of the languages of Micronesia.

The affinities of the Clallam and Lummi with the Selish are too obvious to require demonstration. Indeed Dr. Latham has already classed the former with the Shewhapmukh, or, as he terms it, Atna, of Frazer River, the northernmost of the Selish dialects. The term Atna, it may be mentioned, is improperly applied as a family name to these languages, as it is a Tákulli (Athabascan or Chepewyan) word, signifying, according to Mr. A. C. Anderson, "strangers."

These two vocabularies were collected, the first at Port Townshend, during a residence of a few months, the other at Simiámoo Bay, while I was connected with the N. W. Boundary Commission. Neither of them underwent more than a partial revision, and inaccuracies have therefore doubtless crept in. They are, however, sufficiently reliable to afford the basis of extending comparisons with the other Selish and the more northern coast families.