Alone on an Island 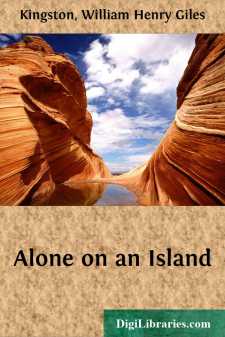 The Wolf, a letter-of-marque of twenty guns, commanded by Captain Deason, sailing from Liverpool, lay becalmed on the glass-like surface of the Pacific. The sun struck down with intense heat on the dock, compelling the crew to seek such shade as the bulwarks or sails afforded. Some were engaged in mending sails, twisting yarns, knotting, splicing, or in similar occupations; others sat in groups between the guns, talking together in low voices, or lay fast asleep out of sight in the shade. The officers listlessly paced the deck, or stood leaning over the bulwarks, casting their eyes round the horizon in the hopes of seeing signs of a coming breeze. Their countenances betrayed ill-humour and dissatisfaction; and if they spoke to each other, it was in gruff, surly tones. They had had a long course of ill luck, as they called it, having taken no prizes of value. The crew, too, had for some time exhibited a discontented and mutinous spirit, which Captain Deason, from his bad temper, was ill fitted to quell. While he vexed and insulted the officers, they bullied and tyrannised over the men. The crew, though often quarrelling among themselves, were united in the common hatred to their superiors, till that little floating world became a perfect pandemonium.

Among those who paced her deck, anxiously looking out for a breeze, was Humphry Gurton, a fine lad of fifteen, who had joined the Wolf as a midshipman. This was his first trip to sea. He had intended to enter the Navy, but just as he was about to do so his father, a merchant at Liverpool, failed, and, broken-hearted at his losses, soon afterwards died, leaving his wife and only son but scantily provided for.

Tenderly had that wife, though suffering herself from a fatal disease, watched over him in his sickness, and Humphry had often sat by his father’s bedside while his mother was reading from God’s Word, and listened as with tender earnestness she explained the simple plan of salvation to his father. She had shown him from the Bible that all men are by nature sinful, and incapable, by anything they can do, of making themselves fit to enter a pure and holy heaven, however respectable or excellent they may be in the sight of their fellow-men, and that the only way the best of human beings can come to God is by imitating the publican in the parable, and acknowledging themselves worthless, outcast sinners, and seeking to be reconciled to Him according to the one way He has appointed—through a living faith in the all-atoning sacrifice of His dear Son. Humphry had heard his father exclaim, “I believe that Jesus died for me; O Lord, help my unbelief! I have no merits of my own; I trust to Him, and Him alone.” He had witnessed the joy which had lighted up his mother’s countenance as she pressed his father’s hand, and bending down, whispered, “We shall be parted but for a short time; and, oh! may our loving Father grant that this our son may too be brought to love the Saviour, and join us when he is summoned to leave this world of pain and sorrow.”

Humphry had felt very sad; and though he had wept when his father’s eyes were closed in death, and his mother had pressed him—now the only being on earth for whom she desired to live—to her heart, yet the impression he had received had soon worn off....