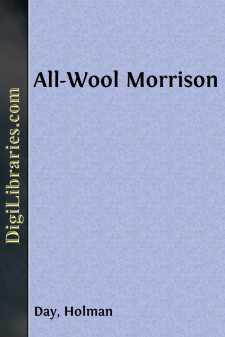 On this crowded twenty-four-hour cross-section of contemporary American life the curtain goes up at nine-thirty o'clock of a January forenoon.

Locality, the city of Marion—the capital of a state.

Time, that politically throbbing, project-crowded, anxious, and expectant season of plot and counterplot—the birth of a legislative session.

Disclosed, the office of St. Ronan's Mill of the city of Marion.

From the days of old Angus, who came over from Scotland and established a woolen mill and handed it down to David, who placed it confidently in the possession of his son Stewart, the unalterable rule was that "The Morrison" entered the factory at seven o'clock in the morning and could not be called from the mill to the office on any pretext whatsoever till he came of his own accord at ten o'clock in the forenoon.

In the reign of David the old John Robinson wagon circus paraded the streets of Marion early on a forenoon and the elephant made a break in a panic and ran into the mill office of the Morrisons through the big door, and Paymaster Andrew Mac Tavish rapped the elephant on the trunk with a penstock and, only partially awakened from abstraction in figures, stated that "Master Morrison willna see callers till he cooms frae the mill at ten."

To go into details about the Morrison manners and methods and doggedness in attending to the matter in hand, whatever it might be, would not limn Stewart Morrison in any clearer light than to state that old Andrew, at seventy-two, was obeying Stewart's orders as to the ten-o'clock rule and was just as consistently a Cerberus as he had been in the case of Angus and David. He was a bit more set in his impassivity—at least to all appearances—because chronic arthritis had made his neck permanently stiff.

It may be added that Stewart Morrison was thirty-odd, a bachelor, dwelt with his widowed mother in the Morrison mansion, was mayor of the city of Marion, though he did not want to be mayor, and was chairman of the State Water Storage Commission because he particularly wanted to be the chairman; he was, by reason of that office, in a position where he could rap the knuckles of those who should attempt to grab and selfishly exploit "The People's White Coal," as he called water-power. These latter appertaining qualifications were interesting enough, but his undeviating observance of the mill rule of the Morrisons of St. Ronan's served more effectively to point the matter of his character. Stewart Morrison when he was in the mill was in it from top to bottom, from carder to spinner and weaver, from wool-sorter to cloth-hall inspector, to make sure that the manufacturing principles for which All-Wool Morrison stood were carried out to the last detail.

On that January morning, as usual, he was in the mill with his sleeves rolled up.

On his high stool in the office was Andrew Mac Tavish, his head framed in the wicket of his desk, and the style of his beard gave him the look of a Scotch terrier in the door of a kennel....