All Four Gospels for Readers 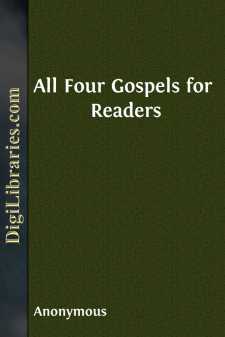 The Gospel of Matthew

The birth of Jesus Christ was thus: When Mary, His mother, was espoused to Joseph, and before they came together, she was found with child of the Holy Spirit. Joseph, a just man, not willing to make her a public example, decided to put her away privately. But while he thought about these things an angel of the Lord appeared to him in a dream and said, Joseph, thou son of David, do not fear to take Mary as thy wife. The one who is conceived in her is of the Holy Spirit. She shall bring forth a son and thou shall call Him Jesus. He will save His people from their sins.

All this was done so that what was spoken of the Lord by the prophet might be fulfilled: Behold, a virgin shall be with child, and shall bring forth a son, and they shall call His name Emmanuel, God with us. Then Joseph awoke and did as the angel of the Lord told him and took unto him his wife. He knew her not until she brought forth her firstborn son, Jesus.

2. When Jesus was born in Bethlehem of Judaea, in the days of King Herod, wise men, magi, from the east went to Jerusalem. They said, One is born King of the Jews....