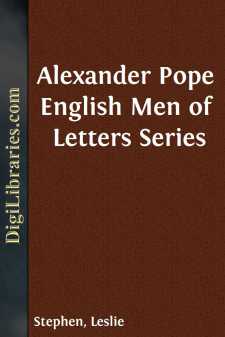 The life and writings of Pope have been discussed in a literature more voluminous than that which exists in the case of almost any other English man of letters. No biographer, however, has produced a definitive or exhaustive work. It seems therefore desirable to indicate the main authorities upon which such a biographer would have to rely, and which have been consulted for the purpose of the following necessarily brief and imperfect sketch.

The first life of Pope was a catchpenny book, by William Ayre, published in 1745, and remarkable chiefly as giving the first version of some demonstrably erroneous statements, unfortunately adopted by later writers. In 1751, Warburton, as Pope's literary executor, published the authoritative edition of the poet's works, with notes containing some biographical matter. In 1769 appeared a life by Owen Ruffhead, who wrote under Warburton's inspiration. This is a dull and meagre performance, and much of it is devoted to an attack—partly written by Warburton himself—upon the criticisms advanced in the first volume of Joseph Warton's Essay on Pope. Warton's first volume was published in 1756; and it seems that the dread of Warburton's wrath counted for something in the delay of the second volume, which did not appear till 1782. The Essay contains a good many anecdotes of interest. Warton's edition of Pope—the notes in which are chiefly drawn from the Essay—was published in 1797. The Life by Johnson appeared in 1781; it is admirable in many ways; but Johnson had taken the least possible trouble in ascertaining facts. Both Warton and Johnson had before them the manuscript collections of Joseph Spence, who had known Pope personally during the last twenty years of his life, and wanted nothing but literary ability to have become an efficient Boswell. Spence's anecdotes, which were not published till 1820, give the best obtainable information upon many points, especially in regard to Pope's childhood. This ends the list of biographers who were in any sense contemporary with Pope. Their statements must be checked and supplemented by the poet's own letters, and innumerable references to him in the literature of the time. In 1806 appeared the edition of Pope by Bowles, with a life prefixed. Bowles expressed an unfavourable opinion of many points in Pope's character, and some remarks by Campbell, in his specimens of English poets, led to a controversy (1819-1826) in which Bowles defended his views against Campbell, Byron, Roscoe, and others, and which incidentally cleared up some disputed questions. Roscoe, the author of the Life of Leo X., published his edition of Pope in 1824. A life is contained in the first volume, but it is a feeble performance; and the notes, many of them directed against Bowles, are of little value. A more complete biography was published by R. Carruthers (with an edition of the works), in 1854. The second, and much improved, edition appeared in 1857, and is still the most convenient life of Pope, though Mr....