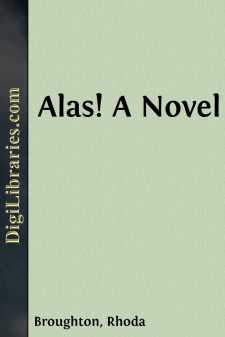 "If you will allow me, I shall have the pleasure of reading aloud to you some passages from 'Mrs. Lirriper's Lodgings,' by Charles Dickens. I do not know much about the book myself, as I have never read it. I dare say that you know more about it than I do; but I am given to understand" (with a glance at the page before him) "that Mrs. Lirriper was a lodging-house-keeper, that she kept lodgings in London. She was a very good sort of woman, I believe" (another hasty glance), "but she sometimes had trouble with her servants. I am told that servants are troublesome sometimes" (a slight nervous laugh, the more nervous because it does not seem to be followed by any echo from the audience). "If you will allow me then, as I say, and if you think it will amuse you, I will read you a little of what she says about these troubles."

The foregoing remarks are uttered in a loud, shy, dogged voice by James Burgoyne to the "Oxford Women's Provident Association." His voice is loud because, being quite unused to public reading, he does not know how to modulate it; it is shy from the same cause of unaccustomedness; it is dogged because he is very much displeased with his present occupation, and has not been successful in concealing that displeasure. When a man runs down to Oxford for a couple of nights, to see how the six years that have passed since he turned his undergraduate back upon the old place have treated her—runs down to a college chum unseen for the same six years—this is certainly not the way in which he expects to spend one of his two evenings.

"I hope you will not mind, Jim"—ominous phrase—the college friend has said; "but I am afraid we shall have to turn out for half an hour after dinner. It is rather a nuisance, particularly as it is such a wet night; but the fact is, I have promised to read to the 'Oxford Women's Provident Association.' Ah, by-the-bye, that is new since you were here—we had no Provident Women in your day!"

"On the other hand, we had a great many improvident men," returns Jim dryly.

"Well, the fact is, my wife is on the committee, and a good deal interested in it, and we give them a sort of entertainment once a month through the winter terms—tea and buns, that kind of thing, sixpence a head; they enjoy it far more than if we gave it them for nothing; and after tea we get people to recite and read and sing to them. I am sure I wish them joy of my reading to-night, for I do not see how I am to make myself audible; I am as hoarse as a crow."

"I know those Oxford colds of old," returns Burgoyne, with that temperate compassion in his voice which we accord to our neighbours' minor diseases. He is sorry that his friend has a cold; but he little knows how much sorrier he will be in the course of the next hour as he adds: "Do not distress yourself about me; I shall be quite happy in your den with a book and a cigarette. Mrs. Brown does not object, does she? And I dare say you will not be very long away."

As he speaks he realizes, with a sort of pang—the pang we pay sometimes to our dead pasts—that, though it is only three hours since he was reunited to his once inseparable Brown, he is already looking forward with relief to the prospect of an hour's freedom from his society—so terribly far apart is it possible to grow in six years. But, before his half-fledged thought has had time to do more than traverse his brain, Brown has broken into it with the eager remonstrances of a mistaken species of hospitality.

"Leave you behind? Could not hear of such a thing! Of course you must come too! It will be a new experience for you; a wholesome change. Ha! ha! and we can talk all the way there and back; we have had no talk worth speaking of yet."

Again it flashes across the other's mind, with the same pensive regret as before, that talk worth speaking of is for ever over between them; but, seeing that further attempts at evasion will seriously hurt the good-natured Brown, he acquiesces, with as fair a grace as he may....