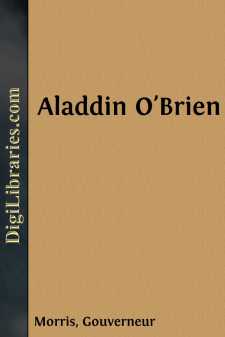 It was on the way home from Sunday-school that Aladdin had enticed Margaret to the forbidden river. She was not sure that he knew how to row, for he was prone to exaggerate his prowess at this and that, and she went because of the fine defiance of it, and because Aladdin exercised an irresistible fascination. He it was who could whistle the most engagingly through his front teeth; and he it was, when sad dogs of boys of the world were met behind the barn, who could blow the smoke of the fragrant grapevine through his nose, and swallow the same without alarm to himself or to his admirers. To be with him was in itself a soulful wickedness, a delicious and elevating lesson in corruption. But to be with him when he had done wrong, and was sorry for it (as always when found out), that was enough to give one visions of freckled angels, and the sweetness of Paradise in May.

Aladdin brought the skiff into the float, stern first, with a bump. Pride sat high upon his freckled brow, and he whistled piercing notes.

Margaret embarked very gingerly and smoothed her dress carefully, before and after sitting down. It was a white and starchy dress of price, with little blue ribbons at the throat and wrists—such a dress as the little girl of a very poor papa will find laid out on the gilt and brocade chair beside her bed if she goes to sleep and wakes up in heaven.

"Only a little way, 'Laddin, please."

The boy made half a dozen circular, jabbing strokes, and the skiff zigzagged out from the float. It was a fine blue day, cool as a cucumber, and across the river from the deserted shipyards, where, upon lofty beamings, stood all sorts of ships in all stages of composition, the frequent beeches and maples showed pink and red and yellow against the evergreen pines.

"It's easy 'nough," said Aladdin. And Margaret agreed in her mind, for it is the splash of deeds rather than the skill or power which impresses a lady. The little lady sat primly in the stern, her mitted paws folded; her eyes, innocent and immense, fastened admiringly upon the rowing boy.

Somehow the cat-boat, anchored fifty yards out and straining back from her moorings, would not allow herself to be approached. For although Aladdin maintained a proper direction (at times), the ocean tide, setting rigidly in and overbearing the current of the river, was beginning to carry the skiff to some haven where she would not be.

Aladdin saw this and tried to go back, catching many crabs in the earnestness of his endeavor. Then the little girl, without being told, perceived that matters were not entirely in the hands of man, and began to look wistfully from Aladdin to the shore. After a while he stopped grinning, and then rowing.

"Can't you get back, 'Laddin?" said the little girl.

The little girl's lips trembled and got white....