Aids to Forensic Medicine and Toxicology 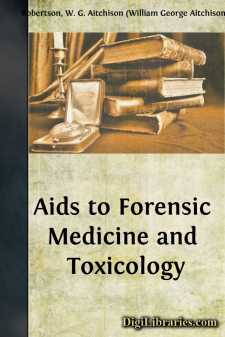 Forensic medicine is also called Medical Jurisprudence or Legal Medicine, and includes all questions which bring medical matters into relation with the law. It deals, therefore, with (1) crimes and (2) civil injuries.

1. A crime is the voluntary act of a person of sound mind harmful to others and also unjust. No act is a crime unless it is plainly forbidden by law. To constitute a crime, two circumstances are necessary to be proved—(a) that the act has been committed, (b) that a guilty mind or malice was present. The act may be one of omission or of commission. Every person who commits a crime may be punished, unless he is under the age of seven years, is insane, or has been made to commit it under compulsion.

Crimes are divided into misdemeanours and felonies. The distinction is not very definite, but, as a rule, the former are less serious forms of crime, and are punishable with a term of imprisonment, generally under two years; while felonies comprise the more serious charges, as murder, manslaughter, rape, which involve the capital sentence or long terms of imprisonment.

An offence is a trivial breach of the criminal law, and is punishable on summary conviction before a magistrate or justices only, while the more serious crimes (indictable offences) must be tried before a jury.

On being called, the medical witness enters the witness-box and takes the oath. This is very generally done by uplifting the right hand and repeating the oath (Scottish form), or by kissing the Bible, or by making a solemn affirmation.

1. He may be called to give ordinary evidence as a common witness. Thus he may be asked to detail the facts of an accident which he has observed, and of the inferences he has deduced. This evidence is what any lay observer might be asked.

2. Expert Witness.—On the other hand, he may be examined on matters of a technical or professional character. The medical man then gives evidence of a skilled or expert nature. He may be asked his opinion on certain facts narrated—e.g., if a certain wound would be immediately fatal. Again, he may be asked whether he concurs with opinions held by other medical authorities.

In important cases specialists are often called to give evidence of a skilled nature. Thus the hospital surgeon, the nerve specialist, or the mental consultant may be served with a subpœna to appear at court on a certain date to give evidence. The evidence of such skilled observers will, it is supposed, carry greater weight with the jury than would the evidence of an ordinary practitioner.

In civil cases the medical witness should, previous to the trial, make an agreement with the solicitor who has called him with reference to the fee he is to receive. Before consenting to appear as a witness the practitioner should insist on having all the facts of the case put before him in writing. In this way only can he decide as to whether in his opinion the plaintiff or defendant is right as regards the medical evidence. If summoned by the side on which he thinks the medical testimony is correct, then it is his duty to consent to appear. If, however, he is of opinion that the medical evidence is clearly and correctly on the opposite side, then he ought to refuse to appear and give evidence; and, indeed, the lawyer would not desire his presence in the witness-box unless he could uphold the case.

Whether an expert witness who has no personal knowledge of the facts is bound to attend on a subpœna is a moot point. It would be safer for him to do so, and to explain to the judge before taking the oath that his memory has not been sufficiently 'refreshed.' The solicitor, if he desires his evidence, will probably see that the fee is forthcoming....