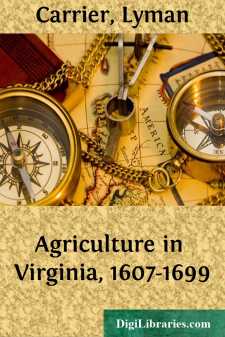 Various events in the latter years of the sixteenth century did much to shape the future destiny of the English nation. With the destruction of the Spanish Armada in 1588, England rose from a minor position in world affairs to one of major importance. One of the first changes was reflected in her attitude towards trade and commerce. England was no longer penned up on her "tight little isle," and her ships could sail the high seas in comparative safety. Expansion of her foreign trade seemed the only answer to her ambitions, but foreign trade required a two way transfer of products. In order to sell goods, it was necessary to buy in exchange. World commerce had already become well stabilized among friendly nations making it difficult for outside businessmen to share in these established commitments. So England was soon to direct her attentions toward America.

It was with eyes focused on future trade that the businessmen who composed the London Company contributed the huge sums that were required to finance the settlement at Jamestown, Virginia. Agriculture was not of prime importance. At that time England was self-sufficient so far as the production of grains and livestock was concerned. Ordinary farm products would not pay the cost of transportation across the ocean. Of course, it was expected that the colonists would eventually produce their own food stuffs; however, until that stage of development occurred it was expected that the London Company would supply the needs of the colony direct from England.

The men of the first expedition were not farmers and took little interest in farming. A good many came, hoping to share in riches, that their imagination had created. Fantastic tales about the Americas had been circulated in Europe during the century following their discovery. The most authentic of these foreign travel journals had been translated into English and published around the turn of the sixteenth century. Reports also of rich prizes, laden with gold, captured on the Spanish Main by English privateers, had inflamed the English mind. If the Spaniards could find such vast treasures in America, why should not the English do the same?

Then too, as the first colony of Virginia lay between 34 and 41 degrees north-latitude, the same approximately as Italy and Spain, it was expected that the much desired warm weather products enjoyed by the Mediterranean people, such as oranges, lemons, sugar, and spices could be produced equally as well in America. Jamestown eventually contributed great financial benefits to the Mother Country from agricultural accomplishments. These benefits could not in 1607 be visualized. To understand the vicissitudes which beset the colonists in the early years of the settlement, one should be familiar with the agricultural practices of both the Old World and the New, for it was by combining the farming wisdom of both sides of the Atlantic into a new agriculture, that the colony became firmly established.

European agriculture reached a high degree of efficiency two thousand years ago in the scrub-forest region around the Mediterranean Sea....