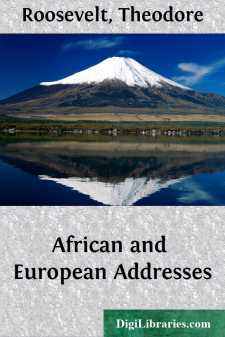 Introduction Mr. Roosevelt as an Orator

In the tumult, on the one hand of admiration and praise and on the other of denunciation and criticism, which Mr. Roosevelt's tour in Africa and Europe excited throughout the civilized world, there was one—and I am inclined to think only one—note of common agreement. Friends and foes united in recognizing the surprising versatility of talents and of ability which the activities of his tour displayed. Hunters and explorers, archæologists and ethnologists, soldiers and sailors, scientists and university doctors, statesmen and politicians, monarchs and diplomats, essayists and historians, athletes and horsemen, orators and occasional speakers, met him on equal terms. The purpose of the present volume is to give to American readers, by collecting a group of his transatlantic addresses and by relating some incidents and effects of their delivery, some impression of one particular phase of Mr. Roosevelt's foreign journey,—an impression of the influence on public thought which he exerted as an orator.

No one would assert that Mr. Roosevelt possesses that persuasive grace of oratory which made Mr. Gladstone one of the greatest public speakers of modern times. For oratory as a fine art, he has no use whatever; he is neither a stylist nor an elocutionist; what he has to say he says with conviction and in the most direct and effective phraseology that he can find through which to bring his hearers to his way of thinking. Three passages from the Guildhall speech afford typical illustrations of the incisiveness of his English and of its effect on his audience.

Fortunately you have now in the Governor of East Africa, Sir Percy Girouard, a man admirably fitted to deal wisely and firmly with the many problems before him. He is on the ground and knows the needs of the country and is zealously devoted to its interests. All that is necessary is to follow his lead and to give him cordial support and backing. The principle upon which I think it is wise to act in dealing with far-away possessions is this: choose your man, change him if you become discontented with him, but while you keep him, back him up.

I have met people who had some doubt whether the Sudan would pay. Personally, I think it probably will. But I may add that, in my judgment, this does not alter the duty of England to stay there. It is not worth while belonging to a big nation unless the big nation is willing, when the necessity arises, to undertake a big task. I feel about you in the Sudan just as I felt about us in Panama. When we acquired the right to build the Panama Canal, and entered on the task, there were worthy people who came to me and said they wondered whether it would pay. I always answered that it was one of the great world-works that had to be done; that it was our business as a nation to do it, if we were ready to make good our claim to be treated as a great World Power; and that as we were unwilling to abandon the claim, no American worth his salt ought to hesitate about performing the task. I feel just the same way about you in the Sudan.

It was with this primary object of establishing order that you went into Egypt twenty-eight years ago; and the chief and ample justification for your presence in Egypt was this absolute necessity of order being established from without, coupled with your ability and willingness to establish it. Now, either you have the right to be in Egypt, or you have not; either it is, or it is not your duty to establish and keep order. If you feel that you have not the right to be in Egypt, if you do not wish to establish and keep order there, why then by all means get out of Egypt. If, as I hope, you feel that your duty to civilized mankind and your fealty to your own great traditions alike bid you to stay, then make the fact and the name agree, and show that you are ready to meet in very deed the responsibility which is yours.

There may be little Ciceronian grace about these passages, but there is unmistakable verbal power. So many words of one syllable and of Saxon derivation are used as to warrant the opinion that the speaker possesses a distinctive style....