Afar in the Forest 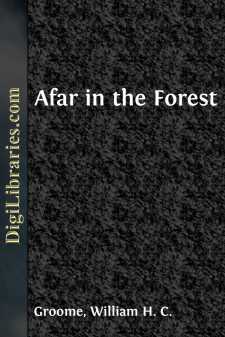 Our habitation in the forest—My share of the spoils of the day’s chase—Uncle Mark commences his narrative—Why my uncles decided to emigrate—Landing in safety, they start up country—Their meeting with Simon Yearsley, an old settler—The settlement is found in ruins—Lily and I rescued—Uncle Mark promises to resume his narrative on the first opportunity—My love of natural history—Uncle Mark continues his narrative—Yearsley goes in pursuit of the indians—The burial of Lily’s mother—The return to the waggon—They reach the nearest settlement—Alarm of the settlers upon hearing of the outrage committed by the indians—Uncle Stephen’s marriage—Conclusion of Uncle Mark’s narrative—Lily and I go berrying—We are attacked by a wolf—Kepenau saves our lives—His present of venison to Aunt Hannah—Kepenau’s belief in the goodness of the Great Spirit—The Indian’s advice.

“Is Lily not Uncle Stephen’s daughter, then?” I asked.

The question was put to my uncle, Mark Tregellis, whom I found seated in front of our hut as I returned one evening from a hunting excursion—it having been my duty that day to go out in search of game for our larder. Uncle Mark had just come in from his day’s work, which had been that of felling the tall trees surrounding our habitation. He and I together had cleared an acre and a half since we came to our new location.

It was a wild region in which we had fixed ourselves. Dark forests were on every side of us. To the north and the east was the great chain of lakes which extend a third of the way across North America. Numberless mountain-ranges rose in the distance, with intervening heights,—some rugged and precipitous, others clothed to their summits with vegetation. Numerous rivers and streams ran through the country; one of which, on whose banks we purposed building our future abode, passed close to our hut. Besides the features I have described, there were waterfalls and rapids, deep valleys and narrow gorges penetrating amid the hills; while to the south-west could be seen, from the higher ground near us, the wide prairie, extending away far beyond human ken. Wild indeed it was, for not a single habitation of white men was to be found to the westward; and on the other side, beyond the newly-formed settlement in which Uncle Stephen resided, but few cottages or huts of the hardy pioneers of civilisation,—and these scattered only here and there,—existed for a hundred miles or more.

Uncle Mark, having lighted the fire and put the pot on to boil, had thrown himself down on the ground in front of the hut, with his back to the wall, and was busy contemplating the dark pines which towered up before him, and calculating how long it would take, with his sharp axe, to fell them.

I had brought home a haunch of venison as my share of the spoils of the chase (in which I had joined Uncle Stephen); and it was in consequence of a remark made by him while we were out hunting, that I had somewhat eagerly asked at Uncle Mark the question with which this story opens.

“No; Lily is not Stephen’s daughter,—nor even related to him,” he answered. “But we will cut some steaks off that haunch and broil them; and while we are discussing our supper, I will tell you all about the matter.”

The slices of venison, and flour-cakes baked on the fire, were soon ready; and seated at the door of our hut, with a fire burning before us to keep off the mosquitoes, we commenced our repast, when I reminded my uncle of his promise.

“It is a good many years ago, but even now it is painful to think of those days,” he began. “We came from Cornwall, in the ‘old country,’ where your Uncle Stephen, your mother, and I were born. She had married your father, Michael Penrose, however, and had emigrated to America, when we were mere boys; and we were just out of our apprenticeship (Stephen as a blacksmith and I as a carpenter) when we received a letter from your father and mother inviting us to join them in America, and setting forth the advantages to be obtained in the new country....