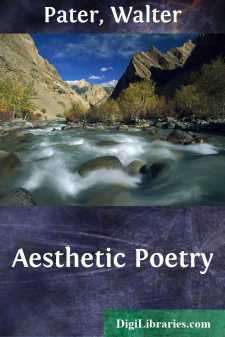 [213] THE "aesthetic" poetry is neither a mere reproduction of Greek or medieval poetry, nor only an idealisation of modern life and sentiment. The atmosphere on which its effect depends belongs to no simple form of poetry, no actual form of life. Greek poetry, medieval or modern poetry, projects, above the realities of its time, a world in which the forms of things are transfigured. Of that transfigured world this new poetry takes possession, and sublimates beyond it another still fainter and more spectral, which is literally an artificial or "earthly paradise." It is a finer ideal, extracted from what in relation to any actual world is already an ideal. Like some strange second flowering after date, it renews on a more delicate type the poetry of a past age, but must not be confounded with it. The secret of the enjoyment of it is that inversion of home-sickness known to some, that incurable thirst for the sense of escape, which no actual form of life [214] satisfies, no poetry even, if it be merely simple and spontaneous.

The writings of the "romantic school," of which the aesthetic poetry is an afterthought, mark a transition not so much from the pagan to the medieval ideal, as from a lower to a higher degree of passion in literature. The end of the eighteenth century, swept by vast disturbing currents, experienced an excitement of spirit of which one note was a reaction against an outworn classicism severed not more from nature than from the genuine motives of ancient art; and a return to true Hellenism was as much a part of this reaction as the sudden preoccupation with things medieval. The medieval tendency is in Goethe's Goetz von Berlichingen, the Hellenic in his Iphigenie. At first this medievalism was superficial, or at least external. Adventure, romance in the frankest sense, grotesque individualism—that is one element in medieval poetry, and with it alone Scott and Goethe dealt. Beyond them were the two other elements of the medieval spirit: its mystic religion at its apex in Dante and Saint Louis, and its mystic passion, passing here and there into the great romantic loves of rebellious flesh, of Lancelot and Abelard. That stricter, imaginative medievalism which re-creates the mind of the Middle Age, so that the form, the presentment grows outward [215] from within, came later with Victor Hugo in France, with Heine in Germany.

In the Defence of Guenevere: and Other Poems, published by Mr. William Morris now many years ago, the first typical specimen of aesthetic poetry, we have a refinement upon this later, profounder medievalism. The poem which gives its name to the volume is a thing tormented and awry with passion, like the body of Guenevere defending herself from the charge of adultery, and the accent falls in strange, unwonted places with the effect of a great cry. In truth these Arthurian legends, in their origin prior to Christianity, yield all their sweetness only in a Christian atmosphere. What is characteristic in them is the strange suggestion of a deliberate choice between Christ and a rival lover. That religion, monastic religion at any rate, has its sensuous side, a dangerously sensuous side, has been often seen: it is the experience of Rousseau as well as of the Christian mystics. The Christianity of the Middle Age made way among a people whose loss was in the life of the senses partly by its aesthetic beauty, a thing so profoundly felt by the Latin hymn-writers, who for one moral or spiritual sentiment have a hundred sensuous images. And so in those imaginative loves, in their highest expression, the Provencal poetry, it is a rival religion with a [216] new rival cultus that we see. Coloured through and through with Christian sentiment, they are rebels against it. The rejection of one worship for another is never lost sight of. The jealousy of that other lover, for whom these words and images and refined ways of sentiment were first devised, is the secret here of a borrowed, perhaps factitious colour and heat. It is the mood of the cloister taking a new direction, and winning so a later space of life it never anticipated....