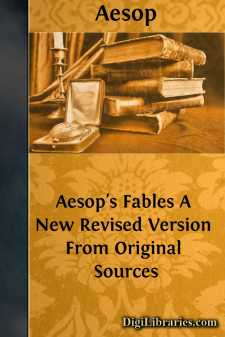 The Life and History of Æsop is involved, like that of Homer, the most famous of Greek poets, in much obscurity. Sardis, the capital of Lydia; Samos, a Greek island; Mesembria, an ancient colony in Thrace; and Cotiæum, the chief city of a province of Phrygia, contend for the distinction of being the birthplace of Æsop. Although the honor thus claimed cannot be definitely assigned to any one of these places, yet there are a few incidents now generally accepted by scholars as established facts, relating to the birth, life, and death of Æsop. He is, by an almost universal consent, allowed to have been born about the year 620 B.C., and to have been by birth a slave. He was owned by two masters in succession, both inhabitants of Samos, Xanthus and Jadmon, the latter of whom gave him his liberty as a reward for his learning and wit. One of the privileges of a freedman in the ancient republics of Greece was the permission to take an active interest in public affairs; and Æsop, like the philosophers Phædo, Menippus, and Epictetus, in later times, raised himself from the indignity of a servile condition to a position of high renown. In his desire alike to instruct and to be instructed, he travelled through many countries, and among others came to Sardis, the capital of the famous king of Lydia, the great patron in that day, of learning and of learned men. He met at the court of Crœsus with Solon, Thales, and other sages, and is related so to have pleased his royal master, by the part he took in the conversations held with these philosophers, that he applied to him an expression which has since passed into a proverb, "μГЎВѕВ¶λλον ГЎВЅВЃ ΦρГЎВЅВ»ξ"—"The Phrygian has spoken better than all."

On the invitation of Crœsus he fixed his residence at Sardis, and was employed by that monarch in various difficult and delicate affairs of state. In his discharge of these commissions he visited the different petty republics of Greece. At one time he is found in Corinth, and at another in Athens, endeavoring, by the narration of some of his wise fables, to reconcile the inhabitants of those cities to the administration of their respective rulers, Pariander and Pisistratus. One of these ambassadorial missions, undertaken at the command of Crœsus, was the occasion of his death. Having been sent to Delphi with a large sum of gold for distribution among the citizens, he was so provoked at their covetousness that he refused to divide the money, and sent it back to his master. The Delphians, enraged at this treatment, accused him of impiety, and, in spite of his sacred character as ambassador, executed him as a public criminal. This cruel death of Æsop was not unavenged. The citizens of Delphi were visited with a series of calamities, until they made a public reparation of their crime; and "The blood of Æsop" became a well-known adage, bearing witness to the truth that deeds of wrong would not pass unpunished. Neither did the great fabulist lack posthumous honors; for a statue was erected to his memory at Athens, the work of Lysippus, one of the most famous of Greek sculptors....