Aesop, in Rhyme Old Friends in a New Dress 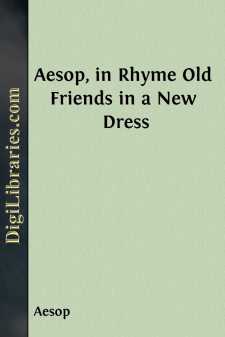 A wolf there was, whose scanty fare

Had made his person lean and spare;

A dog there was, so amply fed,

His sides were plump and sleek; 'tis said

The wolf once met this prosp'rous cur,

And thus began: "Your servant, sir;

I'm pleased to see you look so well,

Though how it is I cannot tell;

I have not broke my fast to-day;

One bone in store or expectation,

And that I call a great vexation."

"Indeed it is," the dog replied:

"I know no ill so great beside;

So poorly fed, come live with me."

"Oh, guard the house, and do not fail

To bark at thieves, and wag your tail."

So off they jogg'd, and soon arrived

At where the friendly mastiff lived.

You have a better house than I."

"Not so," the other then replied,

"If you with me will hence abide."

But what d'ye call that, hanging there?

Is it an iron chain, or what?"

"Friend," said the dog, "I quite forgot

To mention that; sometimes, you see,

They hook that little chain to me;

But it is only meant to keep

Us dogs from walking in our sleep,

And should you wear it, you would find,

It's nothing that you need to mind."

"It's truth by me shall ne'er be tried;

I'll have my liberty again,

And you your collar and your chain."

Our neighbors sometimes seem to be

A vast deal better off than we;

Yet seldom 'tis they really are,

Since they have troubles too to bear,

Which, if the truth were really known,

Are quite as grievous as our own.

A herdsman, who lived at a time and a place

Which, should you not know, is but little disgrace,

Discover'd one morning, on counting his stock,

That a sheep had been stolen that night from the flock.

What he had to expect," said the herdsman, "I trow;

But I've thought of a scheme that will trouble you now."

Describing the thief, and proposed a reward

Of a lamb, to the man who would give information

Concerning the thief, and his true designation.

The project succeeded; for soon there applied

A certain near neighbor, with others beside.

"But tell me the thief," said the herdsman, "at least;"

"Come hither," said they, "and we'll show you the beast!"

"The beast!" said the rustic, who thought he should die on

The spot, when he found that the thief was a lion!

"Ill luck to my hurry, what now shall I do?

I promised a lamb to detect you 'tis true;

But now I'd consent all my substance to pay,

If I could but with safety get out of your way."

Silly people ask things that would ruin, if sent;

They demand them in haste, and at leisure repent.

Some boys, beside a pond or lake,

Were playing once at duck and drake?

Volleys of stones were quickly sent....