Aesop Dress'd Or a collection of Fables 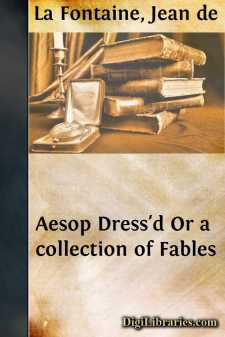 Bernard Mandeville's first extant book in English, Some Fables after the Easie and Familiar Method of Monsieur de la Fontaine, was published in 1703; it reappeared with additional fables in 1704 as Aesop Dress'd. Neither title reveals that, except for two original fables by Mandeville, the book consists entirely of verse translations from the twelve books of La Fontaine's Fables (1668-1694). It is the first book-length translation from these poems into English.

The only previous translations from Fables into English verse appear to have been those made ten years earlier by John Dennis. Miscellanies in Verse and Prose (1693) was a curious volume of Pindaric odes, imitations of Horace, Juvenal, and Boileau, and letters that the young Dennis had written during his travels in France and Italy, including the well-known account of the "delightful horrour" and "terrible Joy" that he had experienced while crossing the Alps; there were, finally, ten fables in octosyllabic couplets—all of them translations from La Fontaine. A word about Dennis's fables may help to put Mandeville's into perspective.

Their resemblance to the French originals is slight. Not La Fontaine, but Samuel Butler, presides over Dennis's fables; indeed, when Dennis discusses them in the Preface to Miscellanies, he fails to mention La Fontaine, although he devotes a large proportion of his remarks to a defense of Butler's burlesque verse, which he acknowledges as his model. Many people were writing Hudibrastics in the 1680's and 1690's: the propensity of Butler's couplet for arousing laughter had made it a fad. With its jog-trot meter, insinuating swiftness, and jarring double and triple rhymes, the Hudibrastic couplet was ideally suited to the mockery performed by low burlesque. All burlesque works by an incongruity between subject and style; the particular function of low burlesque is to debase an elevated subject by treating it in an undignified manner. So it was that Butler, with the assistance of a crazy style, had exploited the gap between the high pretensions and the ridiculous performances of a Puritan knight and his squire.

But of the hordes of scribblers that followed in the wake of Hudibras, scarcely any possessed Butler's sense of satiric propriety. Where his success had been founded on the discrepancy between subject and style that is essential to burlesque, they employed his style with no regard for its suitability to their subjects. Ordinary narrative poems with no satiric intent were decked in Hudibrastic couplets for the sake of a superficial cleverness. Dennis followed the fashion. His ten verse-fables are filled with outrageous Butlerisms:

Isgrim had all the Winter far'dSo very ill, his looks Men scar'd.He had (poor Dog!) got an evil habit,Of going to Bed with the Devil a bit,So that he had contracted a meen,Which truly represented Famine. At sight of Steed that's one huge bit of Fat,Hight Isgrim's heart for joy went pit a pat. Had I not known thy Self and Kindred,Ev'n I my self should have been in dread....
Show more
Show less