Adventures of Huckleberry Finn, Chapters 21 to 25 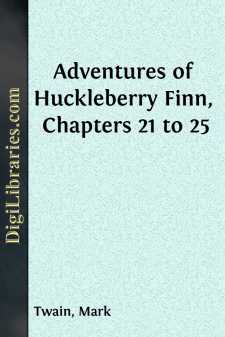 IT was after sun-up now, but we went right on and didn't tie up.  The king and the duke turned out by and by looking pretty rusty; but after they'd jumped overboard and took a swim it chippered them up a good deal. After breakfast the king he took a seat on the corner of the raft, and pulled off his boots and rolled up his britches, and let his legs dangle in the water, so as to be comfortable, and lit his pipe, and went to getting his Romeo and Juliet by heart.  When he had got it pretty good him and the duke begun to practice it together.  The duke had to learn him over and over again how to say every speech; and he made him sigh, and put his hand on his heart, and after a while he said he done it pretty well; "only," he says, "you mustn't bellow out ROMEO! that way, like a bull—you must say it soft and sick and languishy, so—R-o-o-meo! that is the idea; for Juliet's a dear sweet mere child of a girl, you know, and she doesn't bray like a jackass."

Well, next they got out a couple of long swords that the duke made out of oak laths, and begun to practice the sword fight—the duke called himself Richard III.; and the way they laid on and pranced around the raft was grand to see.  But by and by the king tripped and fell overboard, and after that they took a rest, and had a talk about all kinds of adventures they'd had in other times along the river.

After dinner the duke says:

"Well, Capet, we'll want to make this a first-class show, you know, so I guess we'll add a little more to it.  We want a little something to answer encores with, anyway."

The duke told him, and then says:

"I'll answer by doing the Highland fling or the sailor's hornpipe; and you—well, let me see—oh, I've got it—you can do Hamlet's soliloquy."

"Hamlet's soliloquy, you know; the most celebrated thing in Shakespeare. Ah, it's sublime, sublime!  Always fetches the house.  I haven't got it in the book—I've only got one volume—but I reckon I can piece it out from memory.  I'll just walk up and down a minute, and see if I can call it back from recollection's vaults."

So he went to marching up and down, thinking, and frowning horrible every now and then; then he would hoist up his eyebrows; next he would squeeze his hand on his forehead and stagger back and kind of moan; next he would sigh, and next he'd let on to drop a tear.  It was beautiful to see him. By and by he got it.  He told us to give attention.  Then he strikes a most noble attitude, with one leg shoved forwards, and his arms stretched away up, and his head tilted back, looking up at the sky; and then he begins to rip and rave and grit his teeth; and after that, all through his speech, he howled, and spread around, and swelled up his chest, and just knocked the spots out of any acting ever I see before.  This is the speech—I learned it, easy enough, while he was learning it to the king:

All the stores was along one street....