Adventures of Huckleberry Finn, Chapters 16 to 20 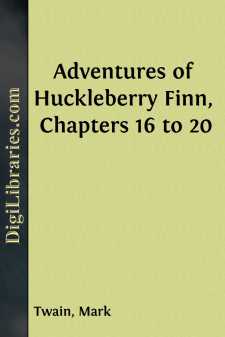 WE slept most all day, and started out at night, a little ways behind a monstrous long raft that was as long going by as a procession.  She had four long sweeps at each end, so we judged she carried as many as thirty men, likely.  She had five big wigwams aboard, wide apart, and an open camp fire in the middle, and a tall flag-pole at each end.  There was a power of style about her.  It AMOUNTED to something being a raftsman on such a craft as that.

We went drifting down into a big bend, and the night clouded up and got hot.  The river was very wide, and was walled with solid timber on both sides; you couldn't see a break in it hardly ever, or a light.  We talked about Cairo, and wondered whether we would know it when we got to it.  I said likely we wouldn't, because I had heard say there warn't but about a dozen houses there, and if they didn't happen to have them lit up, how was we going to know we was passing a town?  Jim said if the two big rivers joined together there, that would show.  But I said maybe we might think we was passing the foot of an island and coming into the same old river again. That disturbed Jim—and me too.  So the question was, what to do?  I said, paddle ashore the first time a light showed, and tell them pap was behind, coming along with a trading-scow, and was a green hand at the business, and wanted to know how far it was to Cairo.  Jim thought it was a good idea, so we took a smoke on it and waited.

There warn't nothing to do now but to look out sharp for the town, and not pass it without seeing it.  He said he'd be mighty sure to see it, because he'd be a free man the minute he seen it, but if he missed it he'd be in a slave country again and no more show for freedom.  Every little while he jumps up and says:

But it warn't.  It was Jack-o'-lanterns, or lightning bugs; so he set down again, and went to watching, same as before.  Jim said it made him all over trembly and feverish to be so close to freedom.  Well, I can tell you it made me all over trembly and feverish, too, to hear him, because I begun to get it through my head that he WAS most free—and who was to blame for it?  Why, ME.  I couldn't get that out of my conscience, no how nor no way. It got to troubling me so I couldn't rest; I couldn't stay still in one place.  It hadn't ever come home to me before, what this thing was that I was doing.  But now it did; and it stayed with me, and scorched me more and more.  I tried to make out to myself that I warn't to blame, because I didn't run Jim off from his rightful owner; but it warn't no use, conscience up and says, every time, "But you knowed he was running for his freedom, and you could a paddled ashore and told somebody."  That was so—I couldn't get around that noway.  That was where it pinched.  Conscience says to me, "What had poor Miss Watson done to you that you could see her nigger go off right under your eyes and never say one single word?  What did that poor old woman do to you that you could treat her so mean?...