Adventures of Huckleberry Finn, Chapters 11 to 15 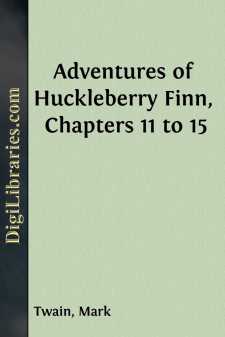 I done it.  She looked me all over with her little shiny eyes, and says:

"Where 'bouts do you live?  In this neighborhood?'

"No'm.  In Hookerville, seven mile below.  I've walked all the way and I'm all tired out."

"Hungry, too, I reckon.  I'll find you something."

"No'm, I ain't hungry.  I was so hungry I had to stop two miles below here at a farm; so I ain't hungry no more.  It's what makes me so late. My mother's down sick, and out of money and everything, and I come to tell my uncle Abner Moore.  He lives at the upper end of the town, she says.  I hain't ever been here before.  Do you know him?"

"No; but I don't know everybody yet.  I haven't lived here quite two weeks. It's a considerable ways to the upper end of the town.  You better stay here all night.  Take off your bonnet."

She said she wouldn't let me go by myself, but her husband would be in by and by, maybe in a hour and a half, and she'd send him along with me. Then she got to talking about her husband, and about her relations up the river, and her relations down the river, and about how much better off they used to was, and how they didn't know but they'd made a mistake coming to our town, instead of letting well alone—and so on and so on, till I was afeard I had made a mistake coming to her to find out what was going on in the town; but by and by she dropped on to pap and the murder, and then I was pretty willing to let her clatter right along.  She told about me and Tom Sawyer finding the six thousand dollars (only she got it ten) and all about pap and what a hard lot he was, and what a hard lot I was, and at last she got down to where I was murdered.  I says:

"Who done it?  We've heard considerable about these goings on down in Hookerville, but we don't know who 'twas that killed Huck Finn."

"Well, I reckon there's a right smart chance of people HERE that'd like to know who killed him.  Some think old Finn done it himself."

"Most everybody thought it at first.  He'll never know how nigh he come to getting lynched.  But before night they changed around and judged it was done by a runaway nigger named Jim."

I stopped.  I reckoned I better keep still.  She run on, and never noticed I had put in at all:

"The nigger run off the very night Huck Finn was killed.  So there's a reward out for him—three hundred dollars.  And there's a reward out for old Finn, too—two hundred dollars.  You see, he come to town the morning after the murder, and told about it, and was out with 'em on the ferryboat hunt, and right away after he up and left.  Before night they wanted to lynch him, but he was gone, you see.  Well, next day they found out the nigger was gone; they found out he hadn't ben seen sence ten o'clock the night the murder was done....