Adventures of Huckleberry Finn, Chapters 06 to 10 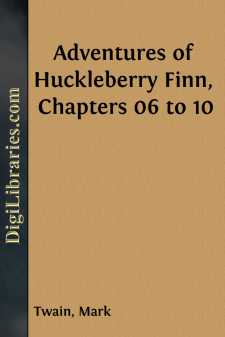 WELL, pretty soon the old man was up and around again, and then he went for Judge Thatcher in the courts to make him give up that money, and he went for me, too, for not stopping school.  He catched me a couple of times and thrashed me, but I went to school just the same, and dodged him or outrun him most of the time.  I didn't want to go to school much before, but I reckoned I'd go now to spite pap.  That law trial was a slow business—appeared like they warn't ever going to get started on it; so every now and then I'd borrow two or three dollars off of the judge for him, to keep from getting a cowhiding.  Every time he got money he got drunk; and every time he got drunk he raised Cain around town; and every time he raised Cain he got jailed.  He was just suited—this kind of thing was right in his line.

He got to hanging around the widow's too much and so she told him at last that if he didn't quit using around there she would make trouble for him. Well, WASN'T he mad?  He said he would show who was Huck Finn's boss.  So he watched out for me one day in the spring, and catched me, and took me up the river about three mile in a skiff, and crossed over to the Illinois shore where it was woody and there warn't no houses but an old log hut in a place where the timber was so thick you couldn't find it if you didn't know where it was.

He kept me with him all the time, and I never got a chance to run off. We lived in that old cabin, and he always locked the door and put the key under his head nights.  He had a gun which he had stole, I reckon, and we fished and hunted, and that was what we lived on.  Every little while he locked me in and went down to the store, three miles, to the ferry, and traded fish and game for whisky, and fetched it home and got drunk and had a good time, and licked me.  The widow she found out where I was by and by, and she sent a man over to try to get hold of me; but pap drove him off with the gun, and it warn't long after that till I was used to being where I was, and liked it—all but the cowhide part.

It was kind of lazy and jolly, laying off comfortable all day, smoking and fishing, and no books nor study.  Two months or more run along, and my clothes got to be all rags and dirt, and I didn't see how I'd ever got to like it so well at the widow's, where you had to wash, and eat on a plate, and comb up, and go to bed and get up regular, and be forever bothering over a book, and have old Miss Watson pecking at you all the time.  I didn't want to go back no more.  I had stopped cussing, because the widow didn't like it; but now I took to it again because pap hadn't no objections.  It was pretty good times up in the woods there, take it all around.

But by and by pap got too handy with his hick'ry, and I couldn't stand it. I was all over welts.  He got to going away so much, too, and locking me in.  Once he locked me in and was gone three days.  It was dreadful lonesome.  I judged he had got drowned, and I wasn't ever going to get out any more....