Adventures of a Sixpence in Guernsey by A Native 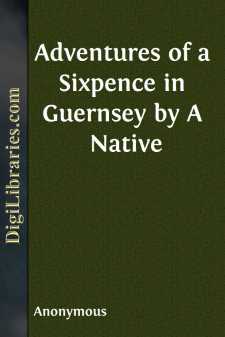 ADVENTURES OF A SIXPENCE IN GUERNSEY.

The breakfast was ready laid on the table, and a gentleman was standing by the fire waiting for the rest of the family, when the door burst open, and two little girls ran in.

"A happy new year, papa!—a happy new year!" shouted each as she was caught up to be kissed, and found herself on the floor once more after a sudden whirl to the ceiling.

"Now catch," said their father, as he started aside and flung a sixpence to each.

Of course they did not catch, for little girls have a strange propensity for turning just the wrong way on such occasions; but the bright new sixpences were none the duller for their fall, and called forth none the less admiration from their proud owners.

Many were the calculations which passed through those curly heads during breakfast-time as to what a sixpence could buy; and it was with many bright visions that they darted away to be dressed to go into the town with their mother.

It was New-year's day; but there was no snow, no bitter cold wind, no beggars shivering in their scanty clothing, none of the scenes of poverty which those accustomed only to an English winter might expect to cast a gloom over the enjoyment of the day. It was a bright sunny morning, every leaf sparkling with dew-drops; groups of neatly-dressed people were to be seen flocking in from the country in every direction; and though the air was fresh enough to incline them to walk briskly along, their hands were not hidden away in muffs and coat-pockets, but were ready for the friendly shake which, with "all the good wishes of the season," awaited them at every step.

Mrs. Campbell and her little girls, after many a greeting of this kind, found their way into the town at last; and the children soon forgot everything in the twelfth-cakes which adorned the pastry-cooks' windows, till the sixpence, which was tightly clasped in each little hand, recalled them to their errand, and they joined the busy crowd in the toy-shop. Who does not know what it is to take a child into these abodes of Noah's arks, cats, dogs, mice, and dolls, and all that is so charming? How each toy is seized on in its turn, to be relinquished in a moment for one more beautiful! It was no easy task that Mrs. Campbell had undertaken; but at last, in a moment of ecstasy over two blue-eyed dolls, the sixpences were paid, and the young purchasers drawn away from further temptation. And we, too, must wish them good-by, with the hope that the next new year may find them bright and happy still, and that before many more have passed over them they will have learnt a wiser and a better way of spending their father's gift; a way in which their sixpence, though it be but a sixpence, will be returned in tenfold blessings on their heads.

It is with one of the little pieces of silver which have just rung in the till that we have to do. It had lain there for about two hours, the same scenes going on around it which we have witnessed with its owner of the morning, when a tall moustachioed young man entered the shop, which was not exclusively devoted to toys, and asked to be shown some gold pencil-cases....